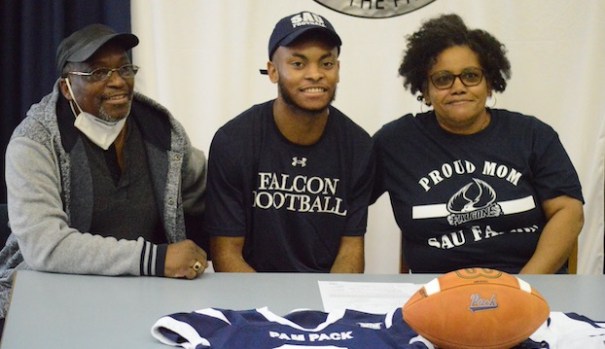 Washington’s Ryan Spruill will play at Saint Augustine’s University in Raleigh in the fall. His father Roland (L) and mother Cosima Williams joined him for the ceremony Wednesday in the WHS media center. (Steve Barnes/Washington Daily News) 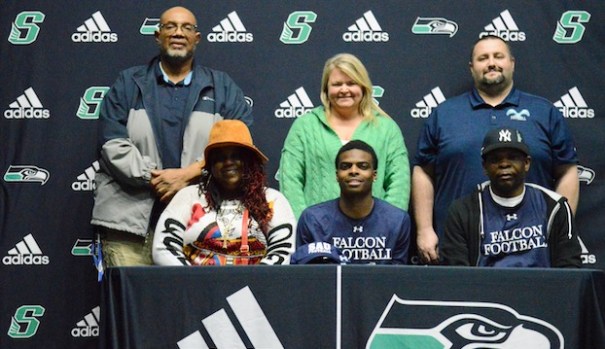 Washington High School’s Ryan Spruill and Southside’s Kenjray Coffield will be college football teammates at Saint. Augustine’s University in Raleigh in the fall.

Both signed scholarships in separate ceremonies at their schools Wednesday afternoon.

While not a package deal, the two have been friends for a few years and are looking forward to teaming up at the next level.

“We were teammates in the Washington rec basketball league a few years back and have stayed in touch,” Coffield said. “He committed first and encouraged me to come along also. It will be nice to know somebody from the start up there.”

The Beaufort County connection goes a step further in Spruill’s case as former teammate Jaden Hambric completed his freshman season for the Falcons this fall.

“He encouraged me to strongly consider it when I was looking around,” Spruill said. “He told me I have a chance to play my first year if I worked hard and it was my best option to keep playing.”

Spruill, a National Honor Society member with a 4.4 GPA has been accepted to several bigger schools in the state, but his athletic career would end.

“I’ve wanted to play college football at some level since middle school,” the prospective business major said. “I think this will be a great combination of athletics and academics and I’m excited to get started.”

“They are building a solid program up there and the competition is very strong,” Coffield said. “I’m going to keep working in the weight room and during track season so I can be ready.”

Spruill was a three-time all-conference selection at cornerback and led the Pam Pack with six interceptions and averaged 21.7 yards on 23 pass receptions with six touchdowns his senior season.

“Ryan checks all the boxes,” WHS coach Perry Owens said. “He was the first one from this class of seniors to be pulled up to varsity as a sophomore and has worked very hard to keep improving. He’s spent three years with me on the track team developing his speed and he’s top 15 in his class academically. He’s a tremendous player and an even better person.”

Coffield led the Seahawks to an 11-2 record with 1,451 rushing yards, 20 touchdowns, 76 tackles and two interceptions as a cornerback. He was the Coastal Plains conference player of the year and played in the inaugural 919-252 All-Star game.

Coffield and Spruill said second-year Falcons head coach David Bowser told them he recruited them as athletes and their positions would be determined after they report in August.

The Falcons compete in the Division II Central Intercollegiate Athletic Association and finished 1-7 in Bowser’s first season. The victory came against arch-rival Shaw in the season’s final game.

“It’s great for the county to have three guys up there now and I’m very proud of Kenjray,” Southside coach Jeff Carrow said. “He’s a great kid and I’m glad to see his hard work pay off.”