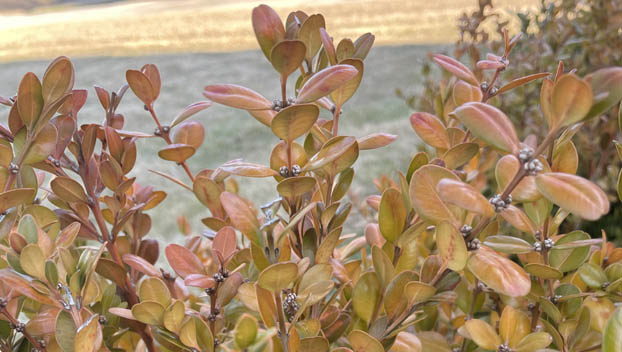 When I was a kid growing up in Western Maryland, there was this house on our road that I always noticed in the winter. It was right by one of the biggest sledding hills around our area. I noticed it because they always had potato sacks wrapped around their bushes. It was the oddest thing to me at that age. Without fail, I would ask my mother every winter why they wrapped them like that, are they expecting them to sprout potatoes over the winter? In late fall, they would have wooden stakes driven in the ground that were about five feet tall. Then they would wrap the burlap around the stakes creating a burlap fortress. It was terribly ugly and reminiscent of the maze in the movie Labyrinth, but it sure did peak my imagination.

Some years later, probably on a visit home after graduating from college, I went down that old road. My family had all moved away to different parts of the county and I was drifting through old memories when I came by that house. It was in the summer and I noticed they had the most beautiful boxwoods where that burlap fortress stood for so many winters when I was a kid. It was then that it dawned on me, they were protecting their boxwoods from the cold.

The burlap was probably a really good idea. It is porous so it would allow air movement through the bush. But there was enough cover to keep them from getting hit by the cold frosts. The other function the burlap would have served was to protect the bushes from the early morning sunshine in the winter. It sounds odd, but on those really cold mornings, when the branches are stiff with frost, the sun can do more harm than good. This would protect the bushes from any winter injury.

I had a call about bronzing of boxwoods that brought all of those memories straight back to the forefront of my mind in trying to figure out all of the possible reasons the foliage would have turned bronze. I’m not certain as to the research-based recommendation on boxwoods so we had better stick to what we know!

I’ll admit, when I was younger, gardening was not my forte. I have learned through education, trial, and error about growing plants in North Carolina. In eastern North Carolina we really do not see winter damage all that often unless the conditions are just right. Still curious about the burlap, I decided to do some research about the burlap. Since the story comes from Maryland, I pulled information from their land-grant college, the University of Maryland. As it turns out, there were no sources through UMD that discussed burlap so I came back to NC State University for information. I found that indeed, burlap is a good cover as are cloth covers. The big thing here is to not use plastic over your plants. This can actually make it colder by trapping humidity that then freezes and lowers the temperature. Plastic will also work to suffocate the plants because there is no gas exchange or air movement allowed under the plastic.

There a couple of ways that the cold weather works on our boxwoods. The first is through multiple frosts. The leaves freeze and then the sun hits them causing a rapid expansion, which in turn ruptures the cells within the leaf. The wind is another issue. When it blows hard in the winter, it dries the plants out, especially if the ground is frozen. Lastly, frozen soil can be a huge issue that damages roots.

Using the burlap wrap will protect from the multiple frosts and the wind in most cases. Use stakes placed around the shrubs, and then wrap the burlap around the stakes leaving the top open. This will allow for airflow and sunshine while minimizing cold injury. Another great way to minimize this type of damage is to make certain plants are watered well before a freeze. Some species can be damaged in temperatures starting at 28 degrees Fahrenheit. Water will help quite a bit in a hard cold winter wind as well.

To protect the roots of our shrubs we want to make sure there is a good mulch layer over the roots. Make sure that there are no exposed roots when planting your shrubs, this is a good planting practice in general. A good layer of bark mulch is between two and three inches thick. If using pine straw then four to six inches is required to produce good results. Do not cover up the base of the plants or shovel mulch over the branches of small shrubs. This will smother them and cause a slow death! Think of your mulch as a blanket, I can’t sleep with a blanket over my face!

There is one more possibility in certain parts of the county and that is nematodes. These are microscopic worms that can be parasitic in rare occasions to plants. There are 1,000’s of beneficial nematodes and only a handful of parasitic nematodes. If you live along the River Road corridor or have a deep sandy soil, this could be a part of the problem as well. This is very easy to diagnose by taking a sample and sending a nematode assay to NCDA&CS. They will send you a report alerting you to any hazards that are present from nematode populations. When taking this sample, it’s a good idea to reserve some soil and send in a soil sample for nutritional purposes as well. NCDA&CS will send you a report that contains a recommendation for fertilizer and/or lime requirements to help your plants flourish.

I hope this help you with any questions you may have with boxwoods or protecting from cold injury in general. If you would like more information, always seek out research based, non-biased information from land grant colleges such as North Carolina State University. You can do this by using the letters NCSU or EXT after your search request.

If you are having trouble with growing in your home landscape, call the Extension office at (252)946-0111 or email Gene Fox at gene_fox@ncsu.edu. I will be starting Master Gardener Volunteer training sometime in March, if you would like to know more about this opportunity, visit https://go.ncsu.edu/2022emgv. I only take a certain number of applicants so please turn in an application if you are interested. I will have a commercial ornamentals and turf class coming up in February. If you need pesticide credits or landscape contractors credits, please keep an eye out for this class, it will be February 24. If you are looking to get your commercial ornamentals and turf pesticide license, there will be a pesticide licensing class and exam coming up at the Vernon James Center in Plymouth. This will be February 15-16, sign up online to ensure your place in the class. Until then, Happy Gardening!