Officials pledge transparency, collaboration ahead of release of red wolves 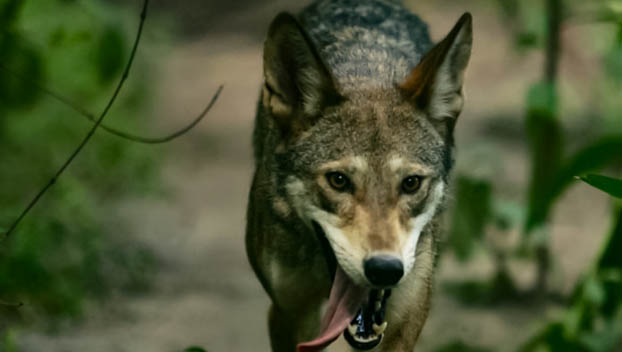 Pictured is a red wolf. Red wolves are mostly brown and buff colored with some black along their backs. Officials are equipping red wolves with orange collars to help prevent them from being misidentified. (Steve Hillebrand / USFWS)

Ahead of the upcoming court-ordered release of nine red wolves into the wild, U.S. Fish and Wildlife Service officials on Tuesday said they are committed to being transparent and increasing public engagement as they revitalize their efforts to protect the most endangered wolf in the world.

The nine red wolves will be released into the North Carolina nonessential experimental population (NEP), an area that spans Beaufort, Dare, Hyde, Tyrrell and Washington counties.

The release of the red wolves will happen sometime in February or March. The exact time will be based on factors such as weather, wolf behavior and pair status. The nine wolves include a family of five — two adults, two yearlings and a puppy. That group will be released into Pocosin Lakes National Wildlife Refuge. Two other pairs of red wolves will be released into Alligator River National Wildlife Refuge.

Red wolves are endemic to the United States. They once inhabited the entire southeastern U.S., but by the 1970s they were pushed to near extinction due to overhunting and habitat loss. In 1973, they were officially listed as endangered under the Endangered Species Act. Officials have seen mixed results with reintroduction efforts since then. To see a complete history of those efforts visit https://www.fws.gov/southeast/wildlife/mammals/red-wolf/.

“We are focusing on collaboration and community and partner engagement to recover this species,” USFWS Wolf Recovery Lead Emily Weller said during a public information meeting Tuesday. “We want to increase landowner and stakeholder engagement, communications and transparency in all of our actions. And I can tell you that the team is really excited about moving forward down this new path.”

Officials said human-caused is the leading cause of death for red wolves. There were seven known deaths of wild red wolves in 2021; of those, five were caused by vehicle strikes, one was caused by a gunshot and one is undetermined.

“The red wolf, based on research here, if it dies of natural causes the average age is about nine years. If you factor in human-caused mortality, it drops down to about four years of age,” said Joe Madison, program manager for the Fish and Wildlife Service’s Red Wolf Recovery Program.

The Fish and Wildlife Service is now working to equip red wolves with orange collars in order to make it harder to misidentify them. Officials said red wolves are sometimes shot because they are mistaken for coyotes.

Red wolves are federally protected under the Endangered Species Act. Killing or harming them is illegal. Within the NEP, a red wolf can be killed only if it is threatening human safety or is in the act of killing livestock or pets. Landowners can harass red wolves on their property in ways that don’t harm the wolves. Unintentional kills such as vehicle strikes are allowed as well.

“We are committed, more than ever before, to working with our partners — the North Carolina Wildlife Resources Commission, landowners, and other stakeholders — to identify ways to encourage and facilitate a coexistence between people and red wolves,” said Catherine Phillips, the Service’s Assistant Regional Director in the South Atlantic-Gulf and Mississippi Basin Regions, in a release following Tuesday’s meeting. “The recent meeting allowed us to hear from the local community and stakeholders, and to share with them what we are doing and plan to do going forward.  We cannot recover the red wolf without them. We look forward to this new era of communication, transparency, and collaboration with our partners on this extremely important journey.”

To aid its recovery efforts, the Fish and Wildlife Service has set up a red wolf recovery hotline at 1-855-496-5837. Anyone with questions or concerns about the red wolf recovery project can call that number and be directed to the appropriate party.

“The Commission appreciates the Service’s efforts to work collaboratively with all stakeholders on the Albemarle Peninsula as they increase the numbers of red wolves released on federal land,” said Cameron Ingram, Executive Director of the North Carolina Wildlife Resources Commission. “We remain committed to working with the Service and all stakeholders to promote the successful outcome of the releases and the continued efforts to improve early successional habitat that benefits numerous species, all while minimizing impacts to landowners.”