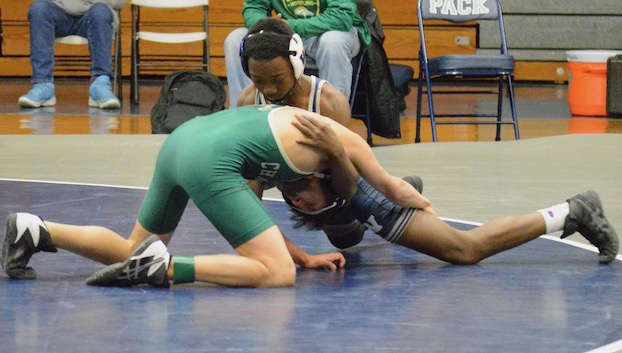 The Washington High School wrestling programs quest for a trip to the dual team state tournament finals in Greensboro will have to wait another year.

The Pam Pack lost to top-seeded Bunn, 51-30, in Wednesday’s third round at Bunn HS.

Bunn defeated upstart Bartlett-Yancey, who came in seeded 11th, but upset previously unbeaten Southwest Onslow in the third round, for the 1A East title and will wrestle West champion Bandy’s for the state title Saturday.

“We had everything lined up the way we wanted it, but just couldn’t capitalize,” coach Chris Penhollow said. “We had four guys who were leading their matches who ended up getting pinned and that can’t happen against an opponent like Bunn. They were very tough and competed hard. We looked great Monday in the first two rounds at home, but didn’t execute Wednesday.”

Freshman Christian Price earned an early victory in the 106 lb. class, but the Wildcats won the next four to take the lead for good.

“I’m proud of our conference regular season and tournament championships, but disappointed that we didn’t advance in the dual teams,” Penhollow said. “We are young and will continue to improve, so the future is bright.

Washington finished the dual team season 17-5. Next up is the individual regional tournament at Ayden-Grifton Feb. 11-12.