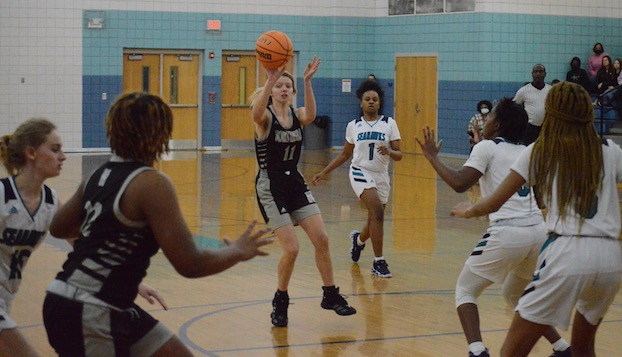 Northside's Paige Sawyer is ready to pass during the Panthers win at Southside. The Seahawks are 12th in the latest RPI rankings. (Steve Barnes/Washington Daily News)

The Northside girls and the Southside boys have improved their playoff position the most as the high school basketball regular season enters the home stretch.

The Panthers girls (9-2, 2-2) lead the latest 1A East Ratings Percentage Index, which is a major factor in playoff seeding. Both conference losses are to 2A East Carteret, which helps their position.

“We’ve been able to get into a consistent flow lately, because we’ve played our games as scheduled,” coach Michelle Leathers said. “We’ve moved the ball better and rebounded better so our transition game has improved.”

County rival Southside (10-4, 3-2) is 12th in the 1A East RPI with three road games next week against league-leading East Carteret (5-0), Pamlico County and Jones County before hosting East Carteret to end the regular season Feb. 15.

There is no conference tournament for the girls or boys, so the regular slate becomes more important.

Washington’s 2A girls team is 4-12, 3-6 and ranked 36th in the RPI. They have games at SouthWest Edgecombe Tuesday and vs. Ayden Grifton Friday before the conference tournament.

On the boys side, Southside has recovered from an 0-6 start to go 6-9 and 4-1 in the Coastal Plains Conference behind 2A East Carteret, 5-0, and Pamlico County at 4-0.

The Seahawks are 20th in the 1A RPI rankings, in solid position for post-season play and a shot at a first round home game.

“We taking things one game at a time, but it would be great to make the playoffs,” coach Davelle Whitney said. “Especially after last year when we made it, but couldn’t compete because of COVID. We’ve played better lately and hope to keep it going.”

Conference rival Northside is trying to dig out of an 0-4 hole to start the league season, but is 18th in the RPI with a 7-6 overall record. Both league losses are to Southside and East Carteret and the Panthers face Lejeune and Pamlico County twice and Jones County once the rest of the way.

Washington is 12th in 2A boys RPI and third in the Eastern Plains Conference at 5-4, behind Farmville Central (10-0) and Greene Central (8-2).

The Pam Pack (10-7) go to SouthWest Edgecombe Tuesday and host Ayden-Grifton Friday before the conference tournament.