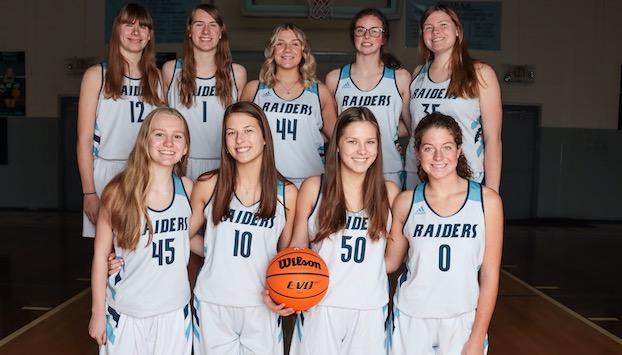 The Knights (6-4, 13-5) had a chance to play spoilers, but lost at PCA, 53-42, Friday giving the Lady Raiders the conference crown. Terra Ceia finished third in the league.

The Lady Raiders (14-6, 8-2) took advantage with a victory over Ridgecroft 45-33 behind 22 points, 13 rebounds and five steals from junior center Reagan Stoop. She shot 10-14 from the floor, while Ginny Pugh added eight points.

Stoop stayed hot while making 11-13 shots for 22 more points with eight rebounds in the 55-37 non-conference win at Crossroads Christian of Henderson Thursday, then finished the week with 26 points and 16 rebounds against Terra Ceia Friday. Pugh added 18 points.

Terra Ceia senior Carley James had 19 points against Lawrence and 11 at PCA. Sophomore Lily Jefferson led the scoring against the Lady Raiders with 16 points. Both teams will compete in the TIC tournament this week with the state tournament next week.

The Raiders lost their bid for the conference title with a 90-71 defeat at Ridgecroft Tuesday as the teams combined to score 51 points in the third quarter.

Maddox Lee led the Raiders with 23 points. Austin Garrish had a career- high 17 points, while Wilson Sawyer chipped in 16 points and nine rebounds.

PCA finished the regular season with an 80-62 victory over the Knights on Senior Night Friday.

“I’m proud of our guys for bouncing back from a small losing skid.” PCA coach Logan Van Staalduinen said. “We have played sloppy basketball our last four games and are going to really focus on cleaning that up for the conference tournament. We are excited for next week and looking forward to the challenge of winning a tournament championship.”

The Raiders are the #2 seed in next week’s TIC tournament, while TCCS is fourth. PCA plays the winner of #3 Lawrence Academy vs #6 Northeast Academy on Thursday. A win Thursday would result in a likely rematch with Ridgecroft School on Friday. All games next week will be played at Albemarle School in Elizabeth City.