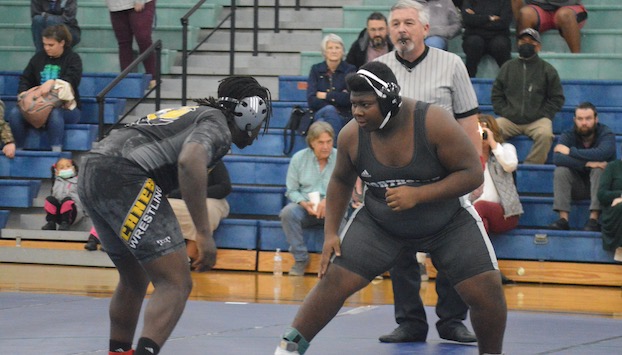 Northside senior Keon Satterthwaite (right) was one of four wrestlers who made it through the Panthers first season last year and helped set the tone for the second year this winter. (Steve Barnes/Washington Daily News)

As the county wrestling teams prepare for the individual regional tournaments this weekend, the Northside program took a major leap forward with an appearance in the 1A dual team state tournament in just their second year.

The Panthers practice in the Northeast Elementary School cafeteria just down the road because the basketball teams use the high school gym for practices and games every day. Where some see inconvenience, coach Daniel Garcia sees an opportunity.

“It’s a great way to let the younger kids know we have wrestling,” he said. “I’m trying to build our program every way I can and exposing it to the upcoming high school kids is a good thing. Also, we can get our work in every day without having to work around a basketball schedule and practicing off-site helps our guys stay dedicated.”

Garcia wrestled at Washington High School until he graduated in 2010, then attended North Carolina A&T State in Greensboro on a teaching fellow scholarship. He emerged with his degree in secondary music education.

He can play any instrument and specializes in the piano and percussion.

“Music has always been part of my life and it was in sixth grade band at P.S. Jones when I realized I had some talent,” he said. “About that same time, one of my friends dad, Lee Moore, encouraged me to try wrestling. My mom wasn’t having any of it until she saw how much it helped me. I’ve been balancing both ever since.”

Garcia landed at Northside right out of college as the Band Director and assisted Chris Penhollow at Washington High School with the wrestling team.

“I’ve learned so much from him and he was a big help to me in starting this program,” Garcia said. “Our former principal, Charles Clark, encouraged me and we got organized just before COVID hit.”

Garcia put a date for an interest meeting on the daily announcements, mentioned it multiple times during band class and one of his trumpet players decided to give it a shot.

“He (Garcia) is a really good teacher and I knew he coached wrestling at Washington, so I decided to go to the meeting,” senior Keon Satterthwaite said. “Washington and Southside had teams, so why not us? He told me wrestling would help me lose weight and get stronger and its worked out great.”

Eight wrestlers started the delayed and shortened spring 2021 season and only four finished. However, Garcia heard enough buzz around the building to know that he made the right move.

“We had to learn the rules, proper techniques and build up stamina in a very short time,” Garcia said. “Almost all of them had never been on a wrestling mat and I knew we accomplished enough to keep the program going.”

All four returned this winter along with 12 first-timers. A 3-13 first year record improved to 9-11 and included a conference champion in senior Terry Columbus.

Garcia was pleased with the improvement and had just accepted Penhollow’s texted invitation to bring the team to WHS to watch the 2A dual team first and second rounds.

“It was Friday around five and I was packing up to go home,” Garcia said. “I gave the guys the day off figuring we had two weeks to prepare for individual regionals. We finished 33rdout of 47 teams in the 1A East, so I decided to check the dual team brackets. I was shocked to see we made it and were wrestling at Rosewood Monday.”

Penhollow was happy to hear of the change of plans and the Panthers gained invaluable experience during the trip to the traditional powerhouse.

“It was a short night in terms of the matches, but hopefully it motivated us to be more like them,” Garcia said. “They had several trophy cases just for wrestling and it give us something to shoot for.”

12 of the 16 return next year and Garcia hopes more underclassmen join the team.

“I’m very proud to be part of the first team at Northside,” Satterthwaite said.

“Coach Garcia has taught us everything we know and is always positive with us. It’s been cool to see all of us make progress and it’s neat to leave a legacy.”