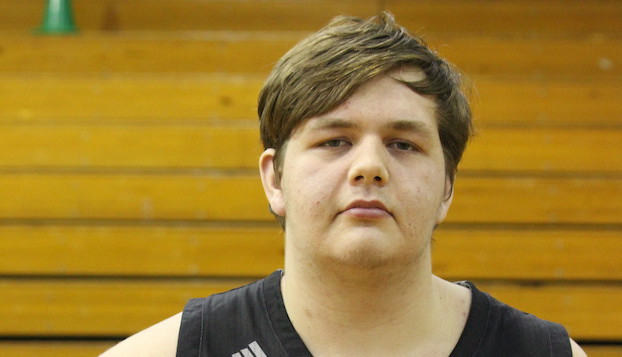 Landon Cahoon has played football and basketball at Northside all four years and thinking about throwing the shot put and discus for the track team this spring. (Steve Barnes/Washington Daily News)

Northside senior lineman/post player Landon Cahoon is a member of the National Honor Society with a 4.2 weighted GPA. The Greenville native reflects on his state title game experience, combining twin passions in college, his little sister and Ironman.

Landon: Being part of the football team and playing in Carter-Finley Stadium for the state championship in the spring. I lived in Winterville until we moved to Bayview before my freshman year, so football was a way to make friends and settle in. Running out of the tunnel at Carter-Finley was an out of this world experience. It seemed really loud to us with our fans there, so it must be unbelievable when it’s sold out for a Wolfpack game.

Landon: The chemistry between (quarterback) Joe Burrow and (receiver) Jamarr Chase has been fun to watch in the playoffs, so I guess Cincinnati. I think they have to run the ball to win, but I’m not sure if their offensive line can handle Von Miller and Aaron Donald. I’m a Broncos fans partly because of Miller and I also like Javonte Williams, who played at Wallace-Rose Hill and Quinn Meinerz, who is a rookie lineman for them. He played at a small college and that’s what I would like to do.

Landon: I’d like to major in computer engineering and also play football. It’s tough to find a good fit for both, but Rose-Hulman Institute of Technology has the top engineering school in the country and a good DIII football team. It would be a stretch since it’s in Terre Haute, In., but I’m looking into it. I’ve applied to N.C. St. for engineering and talked to Methodist and N.C. Wesleyan for football.

Landon: We’ve shot around at home for a long time and she always makes me shoot three-pointers when we play one-on-one. People around here are surprised when she gets knocked down and bounces right up, but I tell them I’ve been doing that to her forever. I think it’s made her tougher. She didn’t start playing competitive basketball until sixth grade and I think she has a knack for it. I’ll take more credit if she gets really good. I’m proud of what she’s done so far.

Landon: Probably Ironman, because his alter-ego, Tony Stark, is really smart and developed a lot of cool high tech stuff. Ironman is obviously very strong, so it’s a good combination.