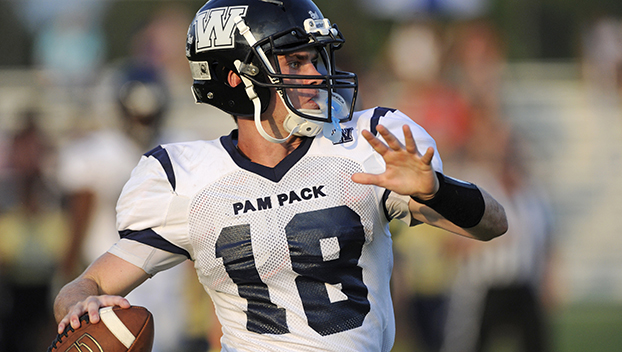 Pippin led the Pam Pack to the third round of the 2A playoffs his senior season and helped the offense set school records for points in a season (602), points per game (46.3) and touchdowns (81).

Wilmington Laney’s Luke Little picked the quarterbacks and liked what he saw from Pippin on film.

“Hayes had high football IQ plays, explosive plays and run-pass option plays on his film and that impressed the coaches,” Owens said. “He came in here as a freshman at about 5’6 with chubby ankles and has worked for everything that’s come his way. He’s stayed in the weight room and has improved his 40-yard dash time by a full second. It’s great that other people have taken notice.”

Pippin will play in the 70th East-West game July 13 at Grimsley High School in Greensboro. He’s the 32nd Washington player to be selected for the game, following offensive lineman Ben Swinson last year and Uriah Lawrence in 2019.

Pippin completed 78.8 percent of his passes for 2,172 yards and 21 touchdowns and gained 1,279 yards rushing with 12 touchdowns. He also filled in at linebacker during the second half of the season and finished among the Pack’s leading tacklers. He was the Eastern Plains Conference Offensive Player of the Year, an All-State selection and played in the first 919-252 All Star Classic. He’s drawn interest from several colleges, but has not announced his decision yet.

“He’s considering his choices right now, but whoever lets him play quarterback is getting a good one,” Owens said. “He’s learned three different offenses here and was in charge of executing all of them. The East-West game is a great honor and he will represent us well.”