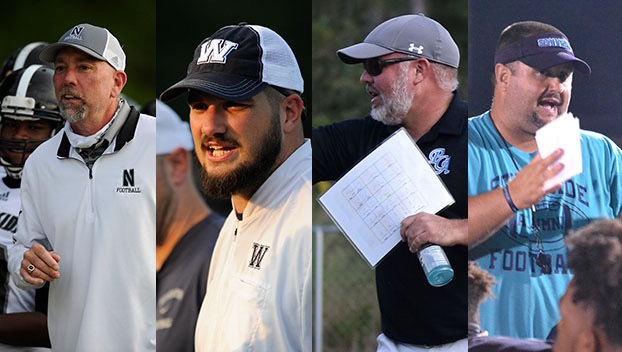 Beaufort County’s high school football coaches think Sunday’s big game should be entertaining and fairly close, but chose the home-standing Los Angeles Rams over the slight underdog Cincinnati Bengals. Before we get to the predictions and comments, here are a few things you might not know about the teams and their players:

Stafford’s 13-year wait for the Super Bowl is the longest by a top overall pick who eventually made it and a win would mark the second-longest wait by a quarterback to win his first title. John Elway collected his first in his 15th season.

Now to the local predictions.

Keith Boyd-Northside: 35-17 Rams. “I think the Rams defensive line has the advantage over the Bengals O-Line. Aaron Donald, Von Miller and the rest of those guys on the line could easily overpower the offensive line and make it a very long day for Burrow. I would like to see Mathew Stafford win in all after the pounding he took. In Detroit all those years. It would be fine if the Bengals win, but I think the Rams defense will be too much for them.”

Jeff Carrow-Southside: 24-17 Bengals: “There is no hotter quarterback than Joe Burrow right now. They have a good mix of run-pass option and things are going their way right now. They also have an outstanding kicker who has put them in this position. Stafford is a good game manager and I’d love to see him get a ring, but I’m going with the hot team right now.”

Stacey Keech-Pungo Christian Academy: 34-27 Rams. “I am split 50-50 on who I want to win, so I hope it’s entertaining. I’ve really enjoyed watching the playoffs this year since every game has gone down to the last play or overtime. I hope this one is the same. Joe Burrow is fun to watch and can come back from any deficit, but the Rams defense is just a little better. Both quarterbacks are smart and have great arms, but I think the Rams will get more pressure on Burrow and maybe force the extra turnover that it might take to win. Based on the other playoff games, I think whoever is leading at halftime will probably lose.”

Burrow is fun to watch, but I think the better Rams defensive stops the flashy Bengals offense enough to win. They have a great front seven and how many hits can Burrow take and keep playing? I think it will be a really good game and I’m rooting for the Bengals, but I’m going with the Rams to win.”