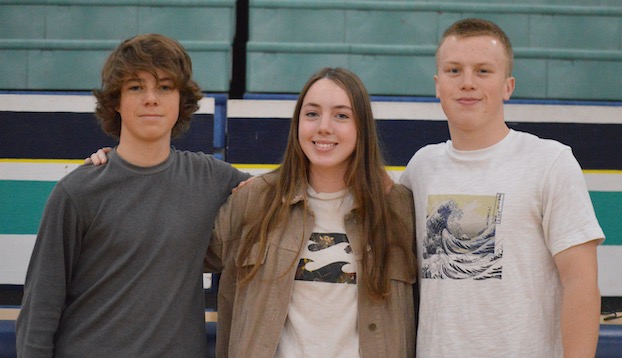 Not many 1A schools in the East have enough swimmers to field a team and Southside High School is no exception. However, a partnership with Washington High School allowed three Seahawks to qualify for this weekend’s state meet in Cary.

Sophomore Ty Cole finished seventh in the 200-freestyle in last weekend’s East regional, which put him in 18th for the state meet.

His sister, junior Delta Cole took fourth in the 50-freestyle and seventh in the 100-free, good for 11th and 18th seeds.

Senior Campbell Barnes finished fourth in the 50-free, but elected not to compete as an 18thseed in the state meet.

All made the daily trip to the Hildred T. Moore Aquatic Center near the airport for practice with Pam Pack swimmers they barely knew, all for the chance to compete in a sport they love.

The Coles swim year-round and knew some of the Washington kids from their summer team, while Barnes was getting re-acquainted after taking his junior season off because of COVID-19 delays.

“It was a great experience and I’m glad I did it,” Barnes, who also plays soccer and baseball, said. “They invited us to come practice with them and after the first few days it felt like we went to school there. I appreciate the Washington coaches for making us feel comfortable and always including us in everything.”

Pam Pack coach Kendall Cox noted several differences within the group, such as the Southside kids absence from relays and the fact that the teams could not combine scores.

“We were two separate teams who practiced together, but were opponents at meets, which was strange on one level, but in the end not really,” Cox said.  “I didn’t know the Southside kids until the first day of practice, but it was fun coaching them. They are all good kids and were dedicated to doing what it took to make it to the state meet. Everyone got along great, which made for a fun season.”

All three Seahawks started in the pool at a young age and all are sprinters. One practice drill that involved multiple trips the length of the pool and back with turns in between stood out.

“The suicides were brutal, but they made us better,” Delta Cole said with a laugh. “We dive in, sprint one-third of the way, flip, sprint back, flip, go halfway, flip and do it until we make it to the other end, then swim back. We do it in relay teams of four, so you have a little break getting out of the pool, but your next turn comes quickly.”

After three months of that routine, Ty Cole says one swim in competition goes much quicker.

“You just push past the pain and keep going,” he said. “It’s worth it to make it to the state meet and we’re going to give it our best one more time.”