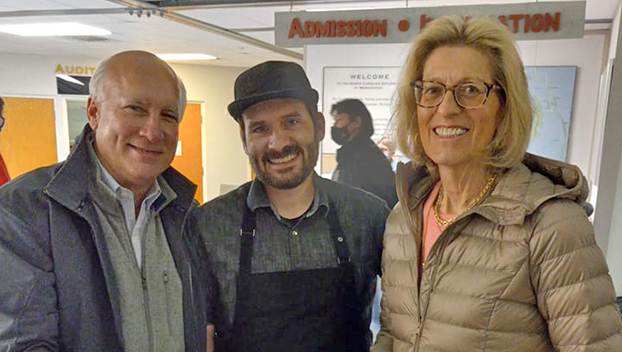 WASHINGTON, NC – On Thursday, Feb. 10, the North Carolina Estuarium held the first of what will be a series of programs devoted to exploring and enjoying key seafood species that live in the Pamlico estuary. Called Estuary-Yum!, the series opened with the spotlight on oysters.

“Estuary-Yum! will celebrate the Pamlico’s most popular seafoods throughout 2022,” said Estuarium Director Tom Stroud. “Our first program focused on oysters, but we’re planning events with shrimp, blue crabs, and scallops, and maybe a couple of others as well. Each Estuary-Yum! will engage a local restaurant to prepare a sampling of unique takes on the spotlight species, and include an program on the history of the fishery and an update on health of the species in the Pamlico.”

For this first Estuary-Yum!, Mulberry House Executive Chef Andrew Wigger prepared oysters in three styles that differ significantly from the traditional eastern NC steamed oyster. Having been a chef in restaurants around the world, Andrew brought an international flair to his “sters” with French-influenced flavors.

Along with the oyster tasting, the event featured a program from Virginia Assistant State Underwater Archaeologist Patrick Boyle. Boyle, who is finishing an MA from ECU’s Program in Maritime Studies, gave an overview of the Pamlico oyster fishery of the late 1800s-early 1900s, and also discussed his research on a wrecked “bugeye” oystering vessel that lies just off the Washington waterfront.

The Estuarium thanks Three Little Spats Oyster Company of Wilmington and The Mulberry House Restaurant of Washington for their support of this event.

Look for announcements about future Estuary-Yum! events on Facebook at North Carolina Estuarium, and on the web at partnershipforthesounds.net.

The North Carolina Estuarium is a facility of the Partnership for the Sounds, a nonprofit organization devoted to environmental education and stewardship on the Albemarle-Pamlico peninsula. 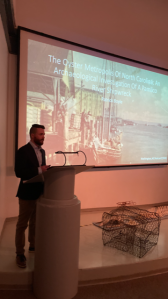