Lady Raiders make it three out of four 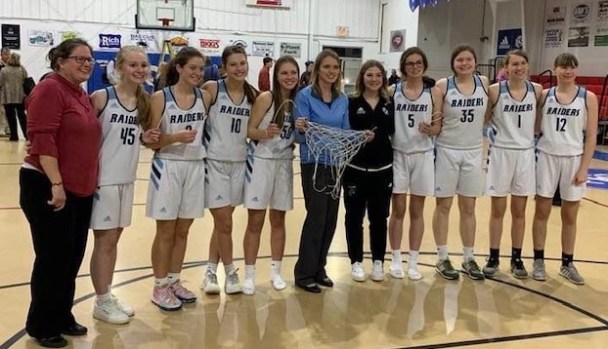 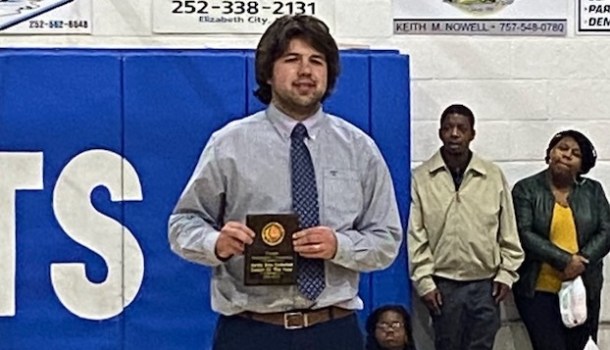 The Pungo Christian Academy girls basketball team repeated as Tar Heel Independent Conference tournament champions and cut down the nets for third time in the last four years with a 49-35 victory over Terra Ceia.

Stoop scored 19 points and grabbed 20 rebounds in the 48-28 semi-final victory over Northeast Academy on the way to claiming the tournament’s Most Valuable Player award. Pugh and Cora Noble joined her on the all-tournament team.

Stoop also won the conference Player of the Year award and Abbey Cutler joined her on the All-Conference team.

A junior three-sport standout, Stoop has earned five Player of the Year awards, three for volleyball and one for softball and basketball.

Jefferson and senior Carley James were named to the All-Conference and All-Tourament teams.

On the boys side, Raiders coach Logan Van Staalduinen was named the league’s Coach of the Year. The 23-year old is believed to be the youngest coach to receive the award.

“it’s an honor to be recognized by your peers, but I don’t win it without my team,” Van Staalduinen said. “They’ve worked hard and made the commitment to improve every day in practice.”

PCA, 14-12, is the eighth seed in the upcoming state tournament and will host the Oakwood/Lawrence Academy winner Thursday after a 64-58 loss to Ridgecroft in the title game. The two teams met four times this season and the Rams prevailed in three of them.

The Raiders held a two point lead with 90 seconds left, but the Rams converted a three-point play and hit several free throws down the stretch to claim their second straight league tournament title.

“I’m so proud of my team,” Van Staalduinen said. They gave everything and came up short. Austin Garrish (15 points) had the game of his life tonight and was the reason we had a chance at the end. It’s a tough loss, but we played our hearts out.”

Garrish and senior Devin Cadle made the All-Tournament team, while Sawyer, Van Staalduinen and Maddox Lee made the All-Conference squad.

The Terra Ceia boys are 8-13 after a conference tournament win over Northeast Academy and a semi-final loss to Ridgecroft.

Senior Elijah Shelton had 22 points in the first game and 20 in second, while junior Hayden Bowen had 17 and 13. 8th grader Ryan Ange 16 and 11. Shelton was named to the All-Conference team.