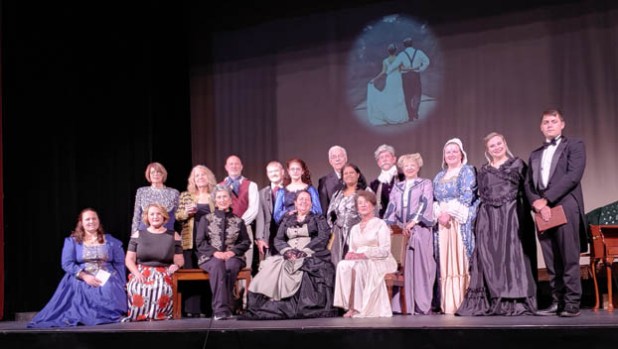 Nineteen cast members peformed in “Love Letters” — the first live drama that has been produced at the Turnage Theatre since the beginning of the COVID-19 pandemic. (Karen Thiel) 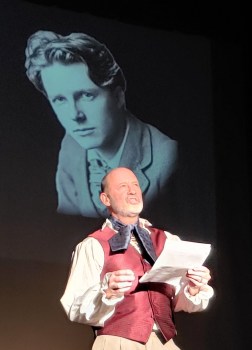 Cast member Scot Craig played two roles in “Love Letters” — as poet Rupert Brooke, pictured behind him on stage, and as his own father, who wrote numerous poems to Craig’s mother over the years. (Karen Thiel) 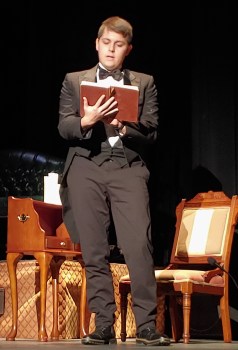 Johnathan Chavez became the personification of World War I poet Gordon Bottomless, whose work became the inspiration for people who were suffering from some the same medical challenges that Chavez faced, writing despite the pain and disability that characterized his life. (Karen Thiel) 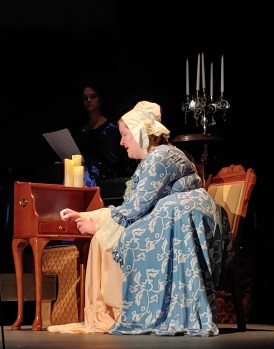 Abigail Adams spent much of her married life writing letters to her husband, president John Adams, while he was away on official business. The one chosen for “Love Letter” was read by Caroline Goff, and written while Adams was ambassador to France. (Karen Thiel) 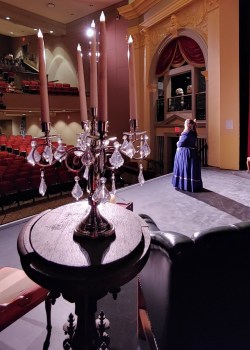 Actress Savannah Medlin took advantage of some quiet moments to perfect her reading of a letter written by Charlotte Bronte, the well known author of “Jane Eyre”. (Karen Thiel)

The voices of notable people ranging from President Teddy Roosevelt to punk rocker Patti Smith — and everything in between — got new life this week, as Arts of the Pamlico Community Players polished up a 2019 original play to celebrate Valentines Day.

“Once everyone had read the ones they would portray, we realized that all these letters from years and year ago are the same things we write down now,” said director Ethan Wolf, who has been Theatre Manager at the Turnage for just under a year. “Love Letters” is the first play he has directed since graduating from ECU in May of 2021. He said the efforts of his 19 cast members matched the dedication he has put into his goal of reviving the Turnage’s pre-pandemic reputation as an arts hub in Beaufort County and beyond.

“Once we began working on the letters chosen for the show, two of our cast members asked if they could read letters written by their family members. It was one of the breakthroughs that have been sprinkled throughout the rehearsal process. Cast members would be reading their assigned letters and realize that the letters matched what was happening in their lives. It was beyond luck,” Wolf said, adding that even the technical aspect became part of the actors’ identification with their roles. “The costumes that Jeff (Phipps) picked for our actors turned out, almost completely, to match the wardrobes worn by the characters they portrayed, which were projected behind them as they read those letters.”

Wolf had as much praise for Phipps as he did for his actors. “We could not have done this without Jeff,” he said of Phipps, who has been with the turn age for more than 20 years, and is currently acting executive director, as well as Arts Director for the theatre. “Jeff has so much wisdom and background. He would sit in the auditorium and pipe up with historical information that would totally open up the vision of who the actors were portraying. And he somehow knows exactly what will work for an actor or actress without even finding out their size first,” Wolf said.

Wolf said he could not be happier about “Love Letters” and, though a date has not yet been set for the next AOP / Turnage offering, he intends to “build this community theatre, focus on taking time to making the productions really high quality, and bring this part of our arts heritage back to Beaufort County.”