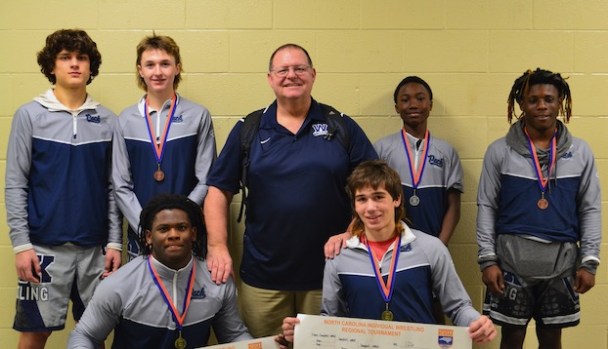 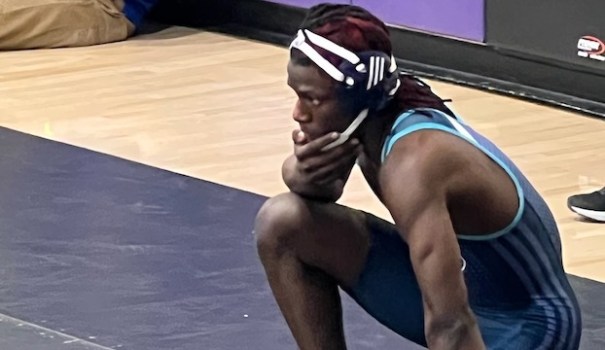 Junior Darrin (DJ) Joyner prepares to wrestle in the 1A east regional tournament. He is the first Southside wrestler to qualify in the three years since the team was formed. (Submitted photo)

Junior Darren Joyner became the first Southside wrestler in the three-year history of the program to qualify for the state tournament with a fourth place finish in Saturday’s 1A East Regional at Rosewood High School.

Six Washington High School grapplers, including two regional champions will also make the trip to Greensboro for the 2A state meet that starts Thursday night.

“DJ was one win away from going last year and he took it as motivation to make it this year,” coach Stanley Dixon said. “Having a state qualifier in just our third year is huge for our program and while DJ will always be the first, he told me he won’t be the last.”

Joyner will compete in the 160 lb. weight class starting Friday.

The Pam Pack finished second in the 2A East regional at Ayden-Grifton behind Southwest Onslow.

Senior Isaac Campbell, who missed six weeks with a lower back injury, won the 126 lb. championship and senior Jonathan Richardson took the crown at 220.

Freshman Christian Price finished second at 106, sophomore Braxton Woolard was third at 113 and senior Damarius Langley was fourth at 132.

The top four wrestlers from each of the four regionals qualify for the 16-man state tournament in each weight class.

“I’m pleased that six of our guys advanced and we had three more that were one win away,” said coach Chris Penhollow. “it was good to see Isaac return with no problems and Jonathan had to come from behind to win his, so there were some good matches. Everybody competed hard and we didn’t have any injuries, so we are looking forward to Thursday.”

The state tournament is back in the Greensboro Coliseum after COVID-19 forced a detour to smaller venues last spring.

Each Pam Pack wrestler will have one match Thursday night, with a full day Friday and the championship round Saturday in the double-elimination format.

“There’s only one match Friday, so they don’t have to hold anything back,” Penhollow said. “Mass chaos will start Saturday with 10 mats going at the same time. The key is to keep the younger guys grounded so they can focus on who’s in front of them.”

Langley, Price and Richardson are making their first appearance, while Woolard and Smith competed last year. Campbell is back for his third appearance.