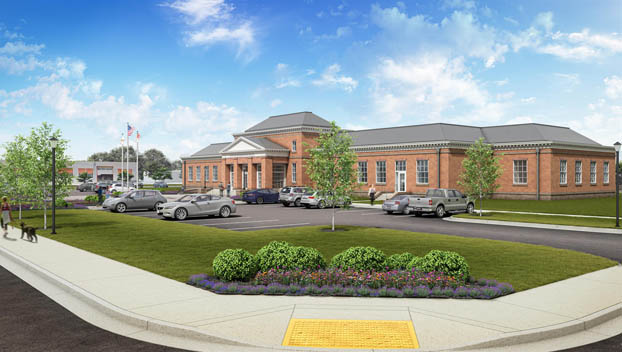 This is a rendering of Washington's new police station, which will be under construction soon.

A groundbreaking ceremony to kick off the construction of Washington’s new police station will be held at 11 a.m. Saturday at the empty lot near the corner of Bridge and West Second streets.

The project has been in the works since Hurricane Florence flooded the Police Department’s previous full-time home in 2018.

City Manager Jonathan Russell said the ceremony will be a “historic” occasion for the city, given the magnitude of the project.

In November 2021, City Council awarded a $7,836,900 contract for the construction of the new police station to Hudson Brothers Construction Company, the low bidder out of nine applicants. Council also approved a $167,000 agreement with Rivers & Associates for construction administration and resident observation services.

The station will consist of a 17,000 square foot, one-story brick building, as well as parking areas. Drainage improvements, surface restoration and some demolition will be involved in the project.

The new building will overlook Bridge Street and will be surrounded by Second Street, Third Street and Van Norden Street on the sides and back.

City Council gave its approval Monday for the city to execute the installment financing contract for the new police station.

The site for the new police station was previously home to a Dr. Pepper bottling plant. The city purchased the site for $800,000 in November 2019.