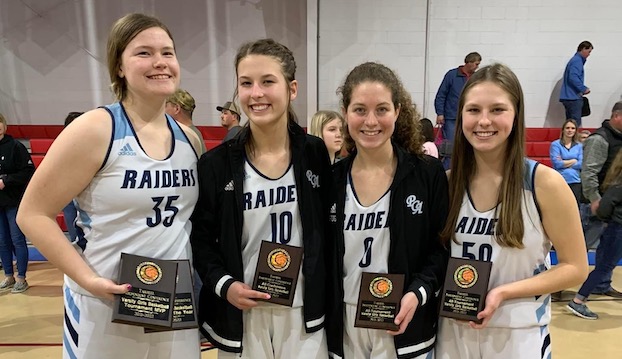 Junior Reagan Stoop (left) was a key factor in Pungo Christian Academy’s playoff victory Tuesday. She’s pictured with Abbey Cutler, who joined her on the All-Conference team along with Ginny Pugh and Cora Noble, who made the conference’s All-Tournament team. (Submitted photo)

Junior post-player Reagan Stoop scored 24 points, grabbed 14 rebounds and had six steals to lead the Pungo Christian Academy girls to a 51-37 victory over conference foe, Ridgecroft Academy of Ahoskie in the first round of the NCISAA 1A state tournament Tuesday night at home.

Stoop, the Tar Heel Independent Conference player of the year, helped the Lady Raiders (17-6) to their sixth straight victory and third over the Rams this season with her fourth straight double-double.

Abbey Cutler scored 11 of her 13 points in the second half, Ashley Williford added eight and Cora Noble had six to complete the scoring.

Fifth-seeded PCA will travel to Merry Hill to meet fourth-seeded Lawrence Academy for Saturday’s second round, having lost all three meeting with their league rival this season.

The winner advances to next week’s third round at top-seeded Grace of Sanford.