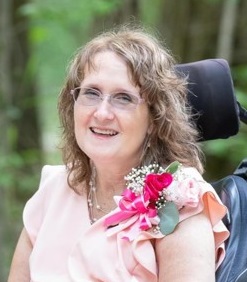 The faithful spirit of Diane Lynn Ronan Gaskins, 59, of Washington, NC was received by her Lord on January 25, 2022. Graveside services were held 11:00 AM Friday, January 28, 2022 at Oakdale Cemetery and were officiated by Gene Andrews.  The family greeted friends following the service at the cemetery.

Diane was preceded in her passing by her doting father Harry Ronan in 2011. She herself precedes a family and community who count themselves blessed to have walked the earth at the same time she did, including her mother Shirley Taylor Ronan; son Kyle Cox and his wife Jessie; son Adam Cox and his wife Lilian and grandchildren Waylon and Lydia; siblings Harry Ronan Jr., Carolyn Ronan, Theresa Price and her husband David, and John Ronan; a number of nieces, nephews, and great-nieces and nephews; and her friends and community at the First Church of Christ on 10th Street in Washington, including Claudya Williams of Washington, a sisterly friend since childhood and companion in her final years.

Diane was born at Landstuhl Medical Center in Germany on October 31, 1962, the youngest child to Harry and Shirley Ronan, who were stationed there with the US Army. She is a 1981 alumna of Washington High School, and later, she graduated from Beaufort County Community College with a degree in Nursing. She was an EMT-I in Beaufort County early in her career and later served as an ER nurse at Beaufort County Hospital (now Vidant) for over 25 years. Diane will always be remembered and associated with the word “sweet” – she had a sweet spirit, a sweet smile, sweet words to say about everyone, and a sweet disposition. She was also a rare natural beauty, but her earthly charms paled in comparison to her genuinely kind-hearted and forgiving soul. She loved beauty, peace, soft fabrics, lovely smells, red toenails, dachshunds – especially her beloved Chloe – Christmas, the Peanuts, and the beach. The saying goes “cardinals appear when angels are near”. Dear friends, please be on the lookout for another cardinal.