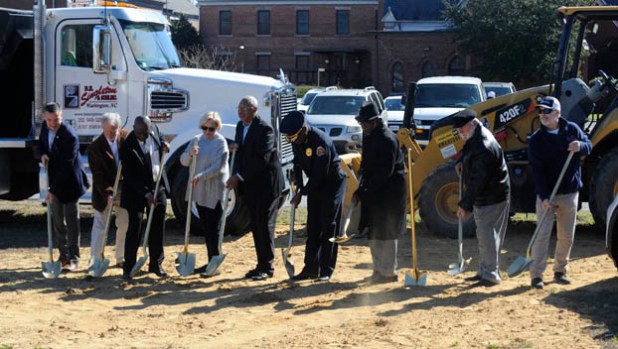 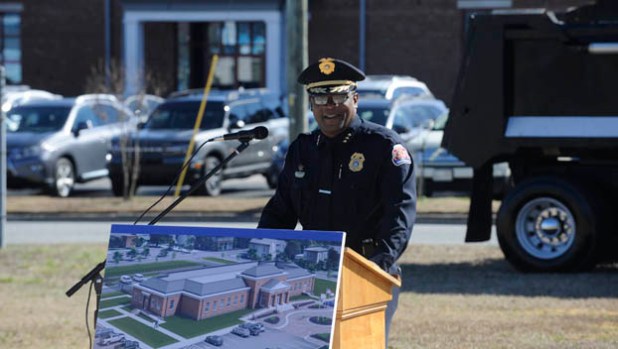 Washington Police and Fire Chief Stacy Drakeford speaks during the groundbreaking ceremony Saturday. In front of him is a rendering of the new police station. (Brandon Tester / Washington Daily News)

For decades, local officials have spoken about the need for a new police station in Washington. The police department had outgrown the size and functionality of its existing facility on West Third Street.

Hurricane Florence flooded the police station in 2018, forcing the department to find a temporary home while also shedding new light on the need for a new station. A long process of conceptualizing the new facility followed, as the city looked to turn the empty lot near the corner of Bridge and Second streets into its new police headquarters. City officials, first responders and local residents gathered at that site Saturday morning to celebrate a major milestone by ceremoniously breaking ground on the project.

“Even though it’s been a long process, sometimes you have to learn about the process to get to the result,” Washington Police Chief Stacy Drakeford said during the ceremony. “…But in this process, the guys and young ladies understood — and I think they understand now — what it takes to build a police department without raising taxes.

“It’s a long process,” Drakeford added, “but every day keeps ticking and that process gets closer and closer. So I’m glad to say on this day that that process is done.”

“And hopefully in 365 days or close thereafter we’ll be moving in to this police department,” Drakeford said. “The men and women deserve it, the citizens of this community deserve it, and it’s well overdue.”

“I’m excited to see this new 17,000-square-foot building finally being built without raising taxes. And I’ll repeat that — without raising property taxes,” Mayor Donald Sadler said, drawing an applause from the audience. “It will be a safer, more accessible, state-of-the-art facility.”