Memories of growing up in Washington 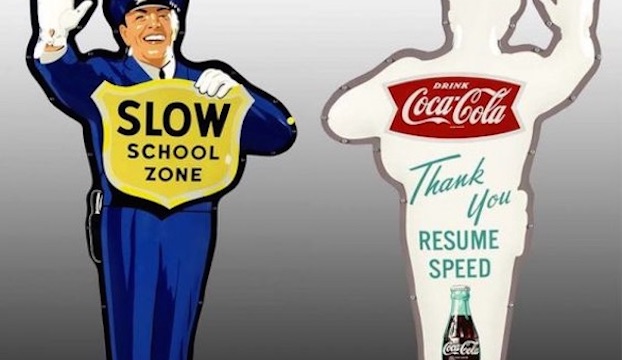 My love for heavy metal began when I was in the third grade. Now it’s not the brilliant heavy metal musicians, Led Zeppelin, Deep Purple and the other musicians of this genre of rock music developed in the mid 60’s and early 70’s I’m referring to.

My love of heavy metal was not music at all. It was the five-foot tall heavy metal school crossing guard safety sign that was in the middle of Bridge and Seventh Streets near the corner of Washington Elementary School.

The sign, which had the image of a policeman, stood on a 22-inch cast iron base and kept silent safety-watch for hundreds of school children.  The sign was a genius stroke of marketing by the Coca-Cola company who placed hundreds of these signs near schools across America. The signs served a dual purpose. They were placed in locations to warn drivers to be on the alert for children crossing the streets to get to school and, to remind people to buy Coca-Cola.

I loved my heavy metal man because he was dependable. He was always there, rain, snow, fog and sunshine. Unlike the human crossing guards who were stationed for duty at the corner of Bridge and Fifth Streets and were there for about an hour in the morning and after school, my heavy metal man stood on watch all day.

Now the wonderful ladies who helped us cross that wide street were a blessing. As a kid, the corner of Fifth and Bridge Streets seemed as wide as an ocean and was a very busy place. There were four gas stations, one on each corner, and the traffic seemed endless.

With one wave of their arms, the crossing guard ladies would stop traffic and walk the kids across the street.  When I got to the heavy metal crossing guard a few blocks away, traffic slowed and stopped for us kids too.  He was my hero. And, once when a dog had chased me a few blocks from my school building, my heavy metal man was my great hero as I clung to him and kicked at the dog who finally ran off.  Sometimes, reminiscing about the simplest things can bring me such great joy. My love for my heavy metal man is one of those things.

19 innings without losing your hat

The music that influenced my childhood