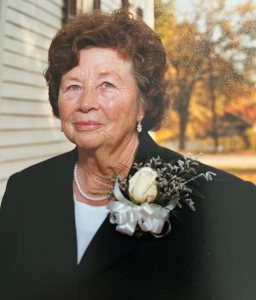 Chocowinity — Mrs. Elva Ruth Elks Smith, age 92, a resident of Chocowinity, NC passed away peacefully in the arms of the angels at her home surrounded by her family and loved ones.

The funeral service will be held on March 2nd at 3:00 PM in Hodges Chapel Pentecostal Holiness Church, officiated by the Rev. Ronnie Gurganus.  Burial will follow in the Trinity Episcopal Church Cemetery. The family will receive friends prior to the service from 1:00 pm to 2:45 pm at the church.

Mrs. Smith was born in Beaufort County and raised near Chocowinity.  She was a daughter of the late William Roy and Myrtle Godley Elks.  She was a 1947 graduate of Chocowinity High School. She married Rufus Smith who preceded her in death on Feb 2, 2018.They were happily married for 71 years before his passing.  For the past 73 years she had made her home in Beaufort County, where she and her husband operated Rufus Smith Food King grocery stores. Mrs. Smith worked as the bookkeeper for the business for many years and retired in 1991. She was a big part in the success of the business working along with our Dad who often said it was his common sense and her book sense that made it work.

She was also a homemaker and quite an amazing cook. She enjoyed her retirement making many trips to Florida, Myrtle Beach, and Pigeon Forge Tennessee, and loved visiting the North Carolina mountains to see the fall colors with her husband Rufus. She also had traveled to many other countries including Spain and Switzerland to name a few. Many of those vacations were spent with her children and grandchildren making fond memories.

Growing up in our community her children and grandchildren would often be told by others that we had the sweetest most kind Mother, and we all knew it was true and that she had a heart of gold.  She loved her family dearly and could often be heard saying as they talked to her by phone or visited her in person “I love you a bushel and a peck and a hug around the neck.” She was an avid reader and kept a journal of family events and we all could count on her to call us and wish us a Happy Birthday on our special day. She loved watching the birds from her chair and could often be seen playing the game Sudoku to keep her mind sharp. She loved to watch the Wheel of Fortune and Duke Basketball games and enjoyed listening to her favorite old songs.

She was the source of love and strength to all her family even up to her death. We are all better for having her be a part of our lives. We are blessed to call her Mama and Grandmamma,

In addition to her parents, Mrs. Smith was preceded in death by her brothers, Eddie Louis Elks and William Roy Elks, Jr. and two sons-in-law, William H Jones and Clyde L Brown.

The family would like to express their heartfelt appreciation to Community Home Care and Hospice for their excellent care. Special thanks to Denise Beaman and Shelia Lassite.

Because of her special love for flowers, they will be accepted and memorials may be made to Hodges Chapel Pentecostal Holiness Church, 2564 Carrow Taylor Road, Chocowinity, NC 27817.