Some history of old Washington neighborhoods 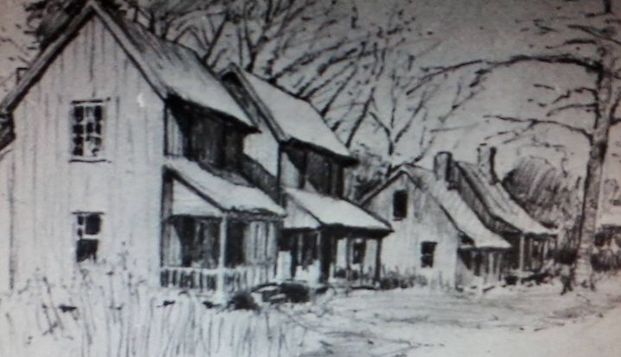 There were many neighborhoods in Washington whose names we seldom hear today.

Ever hear of an African American community called ‘Plum Nelly’? This is a sketch of the houses that were on Blount’s Road many generations ago. It’s where the Bobby Andrews Seventh Street Recreation Center is today. Mr. Edward North, a Black man, owned much of that neighborhood in the early 1900’s and named it Plum Nelly. It extended to where the old Washington High School was. The name meant ‘Plum’ (close) to the country but ‘Nelly’ (nearly) to the city. This sketch is by Catherine Folgar who lived in Washington from 1944-1967.
Then there’s the Pecan Grove Community.  While it was called the Pecan Arbor by previous generations, Pecan Grove is more recent. Pecan Grove Community was decided in 1966 at a meeting at Spring Garden Baptist Church.  The meeting was called to discuss crime in the area and what could be done about it.  The group decided the neighborhood needed a name, and because of the history of pecan trees in the area, the group decided on the name Pecan Grove Community.

This meeting eventually led to the neighborhood becoming a part of the Crime Watch program.  A large white sign stood near the corner of Eleventh and Carolina Avenue for many years designating the area as The Pecan Grove.

The Pecan Grove was part of Fort Washington, which was the largest of the five forts built by African Americans during the Civil War. The Pecan Grove was on the perimeter of the fort bordering what is now Carolina Avenue. The Washington Colored School (later Washington Elementary School,) The Primary School and PS Jones School were once located on the property that extended from Pierce to Market Streets. Old stories say the Union Army soldiers fell in love with the Stuart pecans that grew in this location and took many of the pecans back north with them at the end of the war. Fort Drive is named after the location of this fort.

Boston Land was a 40-acre tract owned by an African American woman, Amanda May, in the Old Ford Road area.

Bragg Town was a Black neighborhood right off of where Haven’s Gardens is today.

The Washington Heights was a community developed near where Beaufort Vidant Hospital is today.  What was most notable about this community was the fact the Washington Investment Community Incorporation around 1909 started building a streetcar line here. The tracks ran from the powerhouse at Washington Heights to Main and Third Streets, a portion of Second Street, to Market and Brown Streets as well as to Oakdale Cemetery. There was no money to buy street cars or complete the project so many years later the rails were taken up.

The Spring Garden Community was on land owned by Samuel R. Fowle. It was located southeast of Market Street, on the southwest by Fifth Street.  It was bound on the west and northwest to Gladden Street in the late 1800’s.  The Washington Fire Department, The Shell Gas Station and Grice’s Auto Repair Shop and several other businesses are located on this land today.