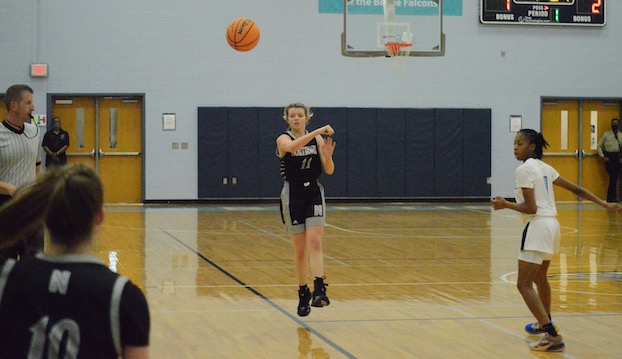 The Northside girls picked an inopportune time to take their first loss against a 1A opponent as they fell, 60-44, at top-seeded Bertie County in the fourth round of the 1A playoffs Tuesday.

The game wrapped up the best two-year run in recent school history after they made it to the east finals last year with an 11-5 mark during the COVID-19 delayed and condensed campaign.

“It was a great season, but I wish we could play again Saturday,” coach Michelle Leathers said. “Bertie was very athletic and forced us to make turnovers that we don’t usually have.

Northside finished 18-3 with the other two losses to 2A conference foe East Carteret for a two-year mark of 29-8 that coincided with senior point guard Paige Sawyer’s arrival as a transfer from Unity Christian.

“I coach in the box (on the sideline) and she coaches on the floor,” Leathers said. “She’s a natural point guard and gets everyone into our offense quickly. She knows when to push it and when to slow down. She can score if we need her to, but she’s an excellent passer and puts her teammates in the right position to be successful. I’ve really enjoyed coaching her.”

Sophomore Mariah (Mimi) Jones led the team in scoring for the second straight year at 18 points a game, but was in foul trouble the entire night in the final game and finished with a season-low six points.

The 6’2 Buck was a hard match-up for most opponents and she averaged a double-double in points and rebounds and had a team-high 14 points in the final game.

“Ball movement was our strength and that’s goes back to Paige seeing the floor and knowing the right pass to make,” Leathers said. “We played extremely well together and hopefully that will continue.”

Jones returns along with freshman guard Olivia Jane (O.J.) Cahoon, who worked her way into the starting lineup early in the season.

“I’d like for O.J. to step in and run things, but she’s young and still. learning,” Leathers said. “She will learn to stay away from turnovers as she continues to play. Jean Grace and Lauren played well in their roles, so I’m excited for the future.