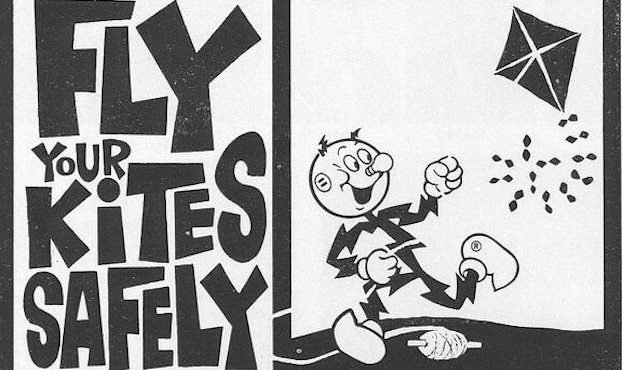 While walking along the Washington waterfront recently, I was pleasantly surprised to see several people with their children flying kites.  It was a sight I had not seen in a long time, and as I stood watching them, so many childhood memories of the days of learning to make and fly kites came flooding back.

Flying kites was one of the most enjoyable activities most of my friends liked.   They were simple and easy to make and inexpensive to buy. My sisters Lena, Marjorie and I had no real kite flying skills, but it was sure fun to try to get one off the ground.  When I grew up here, kite flying was a sure sign spring was near. The windy days of March ensured great kite flying weather.

The first kite I owned was one my second-grade teacher gave me and the rest of the class.  They were promotional items from the local utility company that had a cartoon character named Reddy Kilowatt on it.  Reddy was a man-like figure made of lightning bolts.

He was created around 1926 by an Alabama businessman who got the idea when he saw a bolt of lightning shaped like a man during a storm. He paid power companies to use the character in their marketing and advertising campaigns.

The kite I received came with a flyer that had Reddy Kilowatt on it and instructions and reminders on it of how to fly the kite safely.  I took the kite home and attempted to fly it. Having no real idea of how to fly the kite, it was quickly torn to shreds when it flew right into a hedge bush, and I tried to retrieve it.

Our next-door neighbors Theodore, Charles Ray and Jerome were excellent in making kites from newspaper, brown grocery bags, kite string, slender pieces of reeds or thin sticks and old nylon or cotton stockings.  Their kites were amazing.  They would take them out to an open field, and we’d watch in awe as the kites seemed to reach the sky.

Most kids in my neighborhood made their own kites but Woolworth and McLellan Department Stores sold them for as little as fifteen cents. The most popular brand was the Hi-Fliers.  If you had one and you knew how to fly it properly, you understood how well the kite lived up to its name.

Some of the kids who brought Hi-Fliers would go to the Washington Elementary School playground at Seventh and Pierce Street and have kite flying contests.  For the older kids, their home-made kites with their grandmother’s cotton stockings as the tail actually performed better than the store-bought ones.