Gonzalez pushes through the pain, plans to return to Greensboro 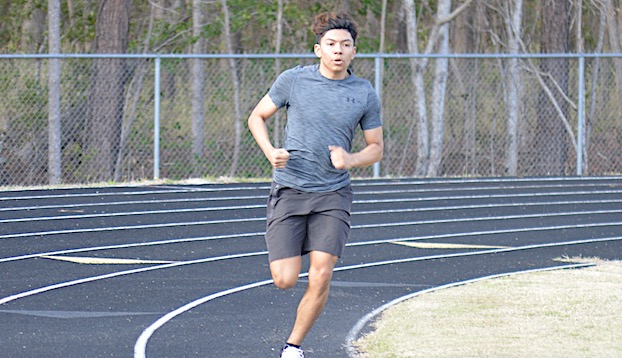 Southside senior track athlete Victor Gonzalez has his sights set on a third appearance in the 1A state meet in Greensboro and is well aware of what it takes to return to the main stage.

Gonzalez finished second in the Coastal Plains Conference meet in his specialty, the 400 meter run, second in the East regional and ninth at the state meet with a time of 53.70 seconds. His coaches say he’s chosen the hardest event.

“it’s the hardest to me because it’s a sprint,” Seahawks assistant coach Davelle Whitney said. “It takes a special athlete to even want to try it because you have to get up to speed quickly and maintain it to the tape. He would do well in any event, but for whatever reason, that race is perfect for Victor.”

Since Beaufort County middle schools don’t have track teams, Gonzalez tried the sport for the first time as a freshman. An accomplished soccer player who made a cameo as the football teams kicker in the playoffs last fall, he thought it would help him stay in shape during the spring.

“Some of my friends tried out when we were freshman and I thought it would be a good way to get my soccer conditioning in,” he said. “I didn’t know anything about the sport other than to run as fast as I could, so my coaches have taught me a lot in four years.”

Coaches Andrea Quinerly and Whitney are counting on him for the 400, the 4 x 200 relay team and are trying to build a 4 x 400 relay team around him.

Quinerly thinks he could win the conference and regional in the 400 and looks for a better finish at the state meet.

“He’s a good kid who works very well on his own and is developing into a team leader for us,” Quinerly said. “He sets a great example by working hard every practice and he’s diligent about getting the most out of every workout. He very much wants to win the conference and regional and place high at state.”

Gonzalez and three seniors qualified for the state meet in the 4 x 400 his freshman year and the experience kept him coming back.

“It was so cool competing on a college track (at N.C. A&T) in front of a lot of people,” he said. “We only had one meet my sophomore year because of COVID, but I set my personal record in the 400 and that kept me going. It was fun to go back last year as well.”

That PR has since been lowered to 53.18, significantly faster that his ninth place time last spring at the state meet.

He runs every day, sometimes two miles in one stretch to make the one lap 400 meters seem that much shorter.

“I can tell when I’m not in shape because I get a pain in my stomach about half a lap in,” he said. “The goal is to push past the pain and not feel it until after I’ve crossed the finish line.”

“I had thought about asking to try for a couple of seasons and finally did this fall,” he said. “It was a great feeling to make my first extra point and see my teammates jumping around and hyping me up. It’s been a lot of fun playing sports here and I hope the best is still ahead.”

After graduation, he plans to start at Beaufort County Community College, then transfer to East Carolina to complete his electrical engineering degree.