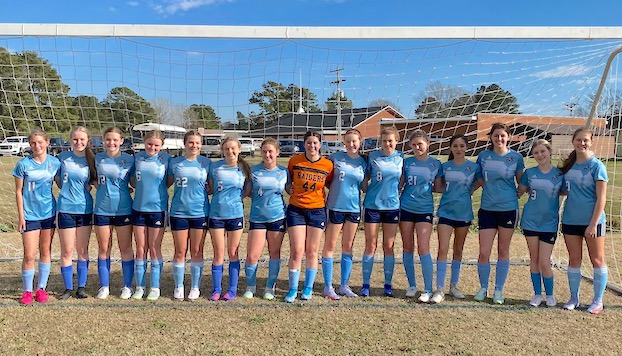 PCA hosted its first-ever girls soccer game on Thursday against The Epiphany School of New Bern. The game was back and forth in the first 20 minutes before the Falcons converted a penalty kick to take a 1- 0 lead. Minutes later, midfielder Reagan Walker just missed a shot from 25 yards off the crossbar that would have evened the score.

That turned out to be the Raiders best chance at a goal the remainder of the game as the Falcons back line turned away every PCA attack for a 6-0 victory.

“I’m very proud of our girls for how hard they played,” coach Logan Van Staalduinen said. “For 13 of our 15 girls today was their first varsity soccer game. I told them after the game that the Epiphany girls had been playing soccer their whole lives and most our girls have played for four days. The fact that we had a mostly competitive game with a more experienced, 2A opponent shows the potential we have.”

Tuesday, PCA banged out 13 hits in a 21-0 rout. Deacon Etheridge led the offense with three hits and three runs batted in. Bo Spencer added two hits and drove in three as eight different players collected at least one hit.

Devin Cadle was efficient on the mound, striking out five in three innings.  Etheridge and Evan Woolard pitched a hitless inning each to close the game.

It was the same outcome Friday in Wilson as Pungo scored nine runs in the first two innings on the way to an 11-1 victory.

Woolard, a freshman, went 2-3 with three more RBI and sophomore Austin Garrish had a pair of hits and drove in two runs.  \

Ethridge pitched the first three innings, struck out five and allowed one run on one hit.