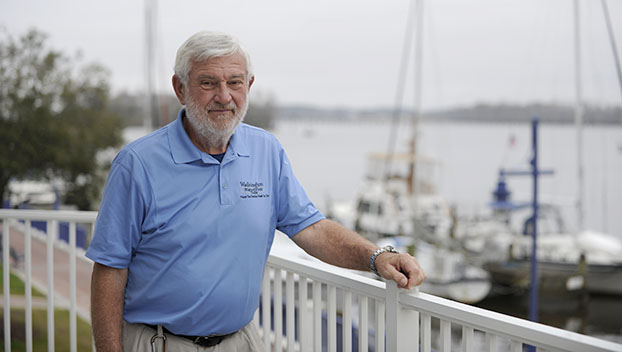 Dockmaster Rick Brass was 14 years old when his grandfather enlisted him in a boat-building project. Those were happy times. “We built that boat during summer of 1964, about a year after president John F. Kennedy was assassinated,” said Brass, who has been in or around boats, rivers, and nautical adventures ever since.

After a full career life, Brass retired from a job doing technical service and electronic training for a forklift manufacturer in Greenville, eventually moving to Washington. “I moved here in early 2009 to get a boat to go cruising,” Brass said. “I was kind of bored, so I took a job as a dock attendant that year.” After five years’ experience with related chores and building a reputation as the person who could answer questions and never run out of doggie treats, Brass was chosen to become dockmaster of Washington’s waterfront docks.

The year he was hired is also when a decision was made to separate everything regarding the town’s docks from from the Parks and Recreation Department, which had been managing the facilities for years. “That increased the amount of maintenance that’s done, keeping up with things like aging dock boards, and trying to expand access with things like handicap ramps. That was the most difficult part of the job,”Brass said this week.

“I love the marketing of the city,” Brass said when asked about his favorite parts of being dockmaster. “We provide information all the time, especially after the visitor center closes at 4 p.m., when my guys become the reference sources for all the people who walk the waterfront. We answer questions about things to see, where to go to eat, and anything nautical for the boaters. We can refer them to quality sources for service, mechanics, parts, and places to re-provision, plus more information in the visitors’ section of the city’s website,” Brass said, adding that the department maintains a presence in three stand-alone websites used frequently by boaters traveling the Intercoastal Waterway.

That wider exposure has been as good for Washington’s waterfront as all the improvements overseen by Brass over the last eight years. Six docks have been added to the two built in the 1980s and four that followed in 2004, equaling 36 slips that are 40 feet long, 24 that average 35-by-16 feet, a floating platform that serves Little Washington Sailing School, and a “floating dock” with kayak and paddle board launches, and space for more boats. Power and water access have been added for long-term “live-aboard” boat owners, some of whom have stayed in Washington throughout the last two winters. Yacht owners can now dock vessels up to 106 feet long.

Brass predicted that all the improvements will help this year’s boating season, expected to be extra busy due to the decline in Covid-19 cases and anticipation of waterborne travel that has built among previously quarantined boaters. Brass said his staff is ready. “I hire extra dock attendants during the summertime. Most have boating experience because sometimes they need to council folks about handling, maintenance, and other nautical issues.” Boaters get an extra gift this year: a “goodie bag” including a flyer about digital walking tours, a list of 16 restaurants located in the 6 blocks around the docks, plus coupons, flyers about Washington’s various museums, and a long list of local summertime events.

Brass said the benefits of dock improvements extend well beyond boating enthusiasts. Six picnic tables by the docks and three at Festival Park, plus a gated play area nearby for youngsters with adult supervision, are popular. Public restrooms are now at the “lighthouse” where Brass’ office and dedicated bathrooms, showers and a laundry facility for boaters are also located. The water-borne gazebo at “People’s Pier” has become a popular location for “walk-up weddings” involving small groups that have a simple waterfront ceremony there, then move to another location for their reception.

Brass said the positive results don’t end there. “Back in 2014 we were costing the city a fairly large amount of money, probably in the neighborhood of $30,00 to $40,000 per year. We actually broke even in 2019, and last year our revenue exceeded our expenses by about $8,000. We are no longer a burden to the town,” he said, adding that these improvements have put Washington’s waterfront “on the map. One of last year’s visitors was a professional captain who does a lot of fishing tournaments up and down the east coast all summer. He told me Washington may have the best waterfront in North Carolina. There may be places with more shopping opportunities, but our access to picnic spaces, walking tours, movies, museums, shopping, a safe atmosphere for families, couples, the elderly, even disposal stations for pets’ waste, all really set us apart from Hilton Head to Norfolk. Our waterfront really is the gem that sets Washington apart from other boating locations.” 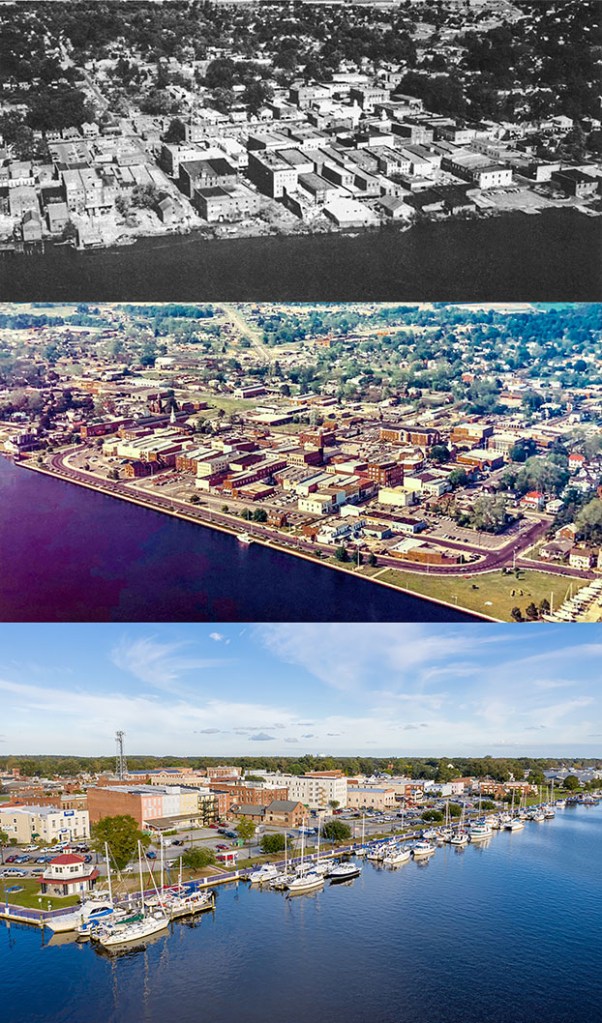