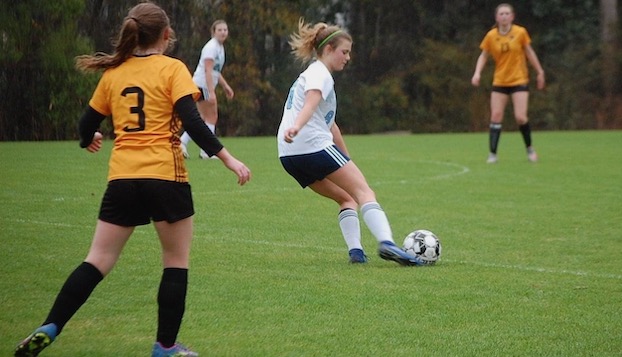 Katie Baxter looks for an open teammate at the Epiphany School in New Bern. (Submitted photo)

Pippin scored on a rebound that tied the score in the second half after Katie Baxter’s breakaway at the end of the first half found the net, but the officials ruled it came after time expired.

Baxter scored the Raiders only goal in a 7-1 loss at the Epiphany School in New Bern Thursday.  She sent a second half rocket to the back of the net in the second half as PCA fell to 0-3.

“We are improving every day,” coach Logan Van Staalduinen said. “While we don’t have a lot of experience, our girls are motivated to get better. We were all very excited when Ashley scored our first goal and Katie is the first person all year to score on Epiphany. Audrey Gibbs has played great as our goalie. She has never played the sport or the position and she is very hard on herself to be perfect. She had almost 30 saves this week in two games and doing everything she can to keep us in games.”

The Raiders opened conference play with a home match against Albemarle School Tuesday.

The baseball team’s season-opening two game winning streak ended with a 10-4 loss at Wilson Christian last week. PCA scored first for the third straight game, but the Chargers scored four times in the second and broke open a 5-4 contest with five runs in the bottom of the sixth.

Devin Cradle went 3-4 with two runs batted in, while Evan Woolard and Deacon Etheridge each had two hits.

Pungo scored four runs in the top of the first Friday at Bethel Christian in Kinston, but couldn’t hold a 6-5 lead as Bethel scored twice in the seventh for a 7-6 victory.

Etheridge was 3-3 with an RBI, while Stephen Pugh had a double and drove in three runs.

Monday, the Raiders fell, 17-6, to Halifax Academy at four as the Vikings scored 10 runs in the third and fourth inning.

Austin Garrish and Evan Woolard each had two hits and an RBI. Pungo will travel to Oakwood and Kerr Vance Academy to finish out the week.