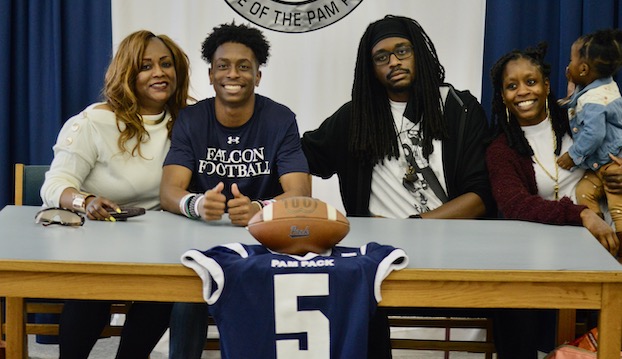 Reid became the third football player in the Class of 2022 from Beaufort County to sign with St. Augustine’s University in Raleigh. He joins teammate Ryan Spruill and Southside’s Kenjray Coffield as Falcons commits after running back Jaden Hambric signed last year.

“It’s tough for guys from small schools east of Greenville to get noticed, but Coach (David) Bowser at St. Aug’s has figured it out,” coach Perry Owens said. “Jaden has gone up there and done well and there are several guys from Elizabeth City who have performed well, so he’s noticed what we are doing.”

The Falcons compete in the Division II Central Intercollegiate Athletic Association (CIAA) and are coming off a 1-9 season in Bowser’s first year.

Reid played in the Washington Youth Football League with future Pam Pack teammates Terry Moore and Hayes Pippin, so he did have a football background, but soccer was his primary sport, along with track coming from P.S. Jones Middle School.

“I had played soccer since fifth grade and liked it and wasn’t planning on playing football here, but the coaches talked me into it,” Reid said. “Coach Owens really encouraged me to try football during track season, so I started in the off-season program before my sophomore year.”

Reid stuck with track and qualified for last spring’s state meet in the 110 and 300 hurdles. He’s the top returning hurdler in the Eastern Plains Conference and looks to return to Greensboro in both events.

However, Thursday’s signing ceremony in front of family, teammates and friends was about his future.

“I’m excited to have the opportunity to play college football,” Reid said. “Having Ryan and Jaden there will be good and I’m looking forward to being teammates with Kenjray. I don’t know him as well since he goes to Southside, but I know he’s a good player.”

Reid realized he had a chance to play in college when Wingate sent him a recruiting letter before his junior year. He also knew his ability to play both sides of the ball and on special teams made him an attractive option.

“He checks all the boxes,” Owens said. “He’s a great kid from a great family and the coaches know he won’t quit two weeks after he gets up there. I’m proud of all three of our guys up there.”

Reid plans to major in political science with an eye toward a career in public service.

“I think it would be really cool to get a bill passed that I sponsored,” he said. “I’ve always liked to try to make other people’s lives better and I think the legislative or executive branch would be the place to make it happen.”