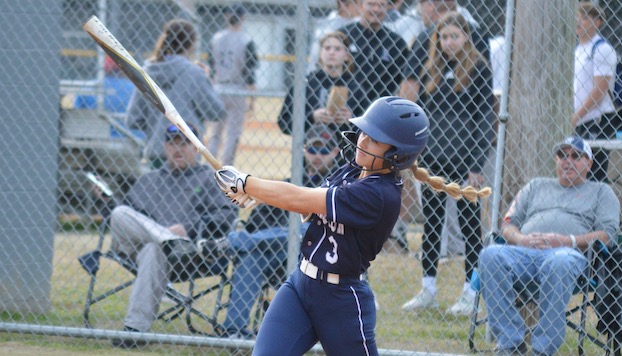 The season is trending upward for the county baseball and softball teams after three weeks of play. As the weather gets warmer, so have the bats as all teams posted a winning week.

The Pam Pack softball team remains undefeated at 5-0 after a 4-2 victory at Northside Monday. WHS scored all four runs in the first two innings before the Panthers (2-3) rallied late. Freshman Emma Orr struck out 12 and worked out of a two-on one-out jam in the bottom of the seventh to claim the win. Senior outfielder Morgan Eisenzimmer leads the offense with a .556 average, 10 hits, eight runs scored and seven runs batted in, while classmate Laci Campbell is hitting .526. Orr has fanned 49 batters and only allowed three earned runs in 25.2 innings.

“Our hitting has been outstanding so far,” coach Brad Horton said. “Any time you hit .395 as a team with at least 10 hits in every game, you are giving yourself a lot of chances to score. Emma has been tremendous on the mound also.” The Pack hosts 4A power D.H. Conley Wednesday in a make-up game to highlight a busy week.

Northside is 2-3, with two of the losses to Washington. The Panthers played Friday at Columbia before starting Coastal Plains Conference games next week.

Southside is 3-2, after scoring 21 and 18 runs against Tarboro and 25 against Hertford County.

Senior Alexis Whitehurst leads the team with a .385 average, while Moriah Jones and Dakota Askew have each driven in seven runs.

Pungo Christian’s softball team is 4-0 after an 11-4 victory over defending NCISAA 1A state champion Halifax Academy Monday in their only action this week.

On the baseball diamond, Southside defeated Hertford County, 17-2, Monday and 3A Croatan, 4-3, Tuesday before falling at Tarboro, 5-3, Wednesday for a 2-4 record.

“Winning three games in three days is tough to pull off, but we almost did,” coach Daniel Folk said. “We’ve had a challenging early schedule and several guys are playing well. We’ve had good pitching and our defense has been solid since I moved Luke Perry to first base. We’re excited about starting conference games next week.”

Leadoff hitter Campbell Barnes is off to a .368 start while fellow senior Bryan Gutierrez is batting .389.

Conference rival Northside is 4-2 with a game at Columbia Friday.

Mitch Godley and Eli Huynh are both batting .500, while Huynh has scored 12 runs and driven in nine.

The Pam Pack finished non-conference play 4-3 with the four wins in their last five games.

Connor Edwards leads the offense with a .429 average and 10 runs scored, while Hayes Pippin is batting .381 with eight RBI.

Austin Cherry is 2-0 on the mound, while John Hammill and Edwards are 1-0.