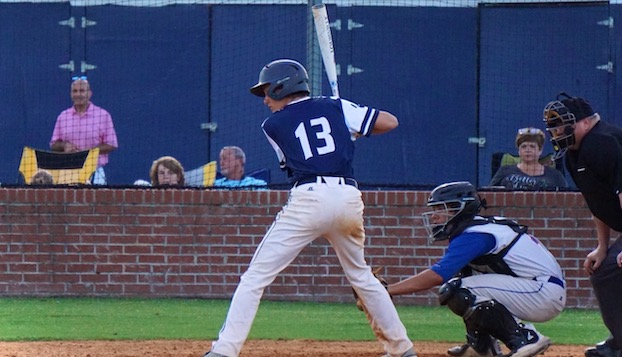 Junior Austin Cherry has recorded half of Washington High School’s victories pitching in relief in the early part of baseball season, but he’s more comfortable receiving pitches than throwing them.

The Pam Pack had won four of the last five going into Tuesday night’s game against undefeated West Craven and Cherry, the starting catcher, took over in relief in victories over Kinston and Pamlico County.

“He was our starting catcher as a sophomore last year and that’s his best spot, but we’ve needed him to pitch some because of injuries,” coach Lane Raper said. “He’s done well for us and he’ll probably be on the mound a few more times if we need him.”

Cherry learned the game from his father, Bill, who caught through high school while growing up in Chicago. He taught his only son from an early age and Austin developed into a solid receiver.

“It’s the best spot on the field to me because you get to touch the ball almost every play and the game is in front of you,” Cherry said. “There’s so many little things that I’m constantly learning and it’s fun because there’s always something different happening.”

Since his father grew up on the north side of Chicago, Cherry is a Cubs fans and has attended many games at Wrigley Field with his family.

“He pretty much brain-washed all of us (mom and older sister) into being Cubs fans,” Cherry said with a laugh. “Kris Bryant, Anthony Rizzo, Javier Baez and Starlin Castro were my favorites when they played there. It was great when they won the World Series in 2016.”

Cherry started playing tee ball in the Washington Youth Baseball League and joined his first travel team when he was eight. He and Pam Pack teammate Evan Waters play on the 18U Gametime Prospects showcase team, which has led to interest from college coaches.

“I’ve heard from a few smaller schools and coach told me Elon was asking about me,” Cherry said. “My goal is to play college baseball and I’d love to play at N.C. St. I’ve seen plenty of games there growing up and they have a great facility and great coaches”

The Pack is 4-3 after a slow start and Cherry brought a five-game hitting streak with him into Tuesday’s game. His average is up to .300 after an 0-5 start and he’s second on the team with nine runs scored.

Despite the pitching victories and 15 strikeouts in eight innings, Cherry isn’t in any hurry to get back on the mound.

“I’m a catcher who pitches when they need me,” he said. “I’ve learned how pitchers think, so that helps me relate better with the regular pitchers. I have more insight into what they go through and that’s helped me in tough situations. I have to know when to encourage them and when to be a bit firmer.”

Cherry also plays center back for the Pam Pack soccer team, which keeps him in condition for baseball season. The National Honor Society member also likes to stay busy playing the guitar when he’s not playing or studying.

“He can do about anything he puts his mind to,” Raper said. “He hasn’t missed a practice in three years, he pretty much shuts down the opponent’s running game with his arm and his teammates listen to him when he talks. He’s not one of those guys who is always trying to prove they are good. Austin just lets his talent show naturally.”