High Five: from the track to the mat and back 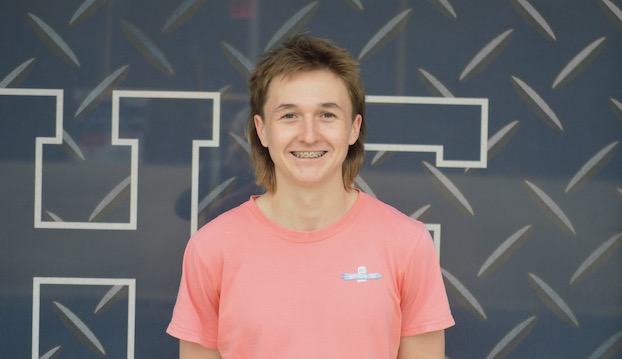 Washington sophomore Braxton Woolard has competed in the state cross country and wrestling meets so far this year and will try to add an appearance at the state track meet this spring. (Steve Barnes/Washington Daily News)

Competing for the Pam Pack track team was an afterthought for sophomore Braxton Woolard until his coaches in other sports encouraged it. Now he has a chance to run in the state meet after completing in the state cross-country and wrestling meets. The Washington native finished third in the east regional in the 113 lb. class and didn’t place at the state meet.

Braxton: Definitely wrestling. I started running cross-country as a freshman because my teammate, Isaac Campbell, told me it would be good for my endurance. It turned out to be a fun experience because we became the first Washington boys team to qualify for state in a long time.

Braxton:  I saw a signup sheet during my seventh grade year at P.S. Jones and thought it looked interesting. My mom encouraged me to do it and my coach, Brett Campbell, taught me the basics. He showed confidence in me and I’ve had good success with it so far. Coach Penhollow here at WHS has helped me a lot also.

Braxton: Like night and day. We had 10 mats going at the same time this year and the place felt and sounded like it was packed. Walking out of the tunnel into the arena felt amazing. It made all the hard work worth it and makes me want to work harder to get back.

Braxton: Yes, and it’s also been fun so far. Coach (Dawn) Landen is the distance coach for track and she is my cross-country coach also. I have some of the same teammates and have met new ones. I can tell running has helped my endurance for wrestling because I’m still fresh in the third period. I’ll be in the 4 x 800 relay and run the mile and two mile. I’m looking forward to our first meet next week since the first two have been rained out.

Braxton: My mom, dad and sister who are all very much alive. We eat together regularly and I always enjoy it. We’d have rib eye steak, baked potatoes with mac and cheese.