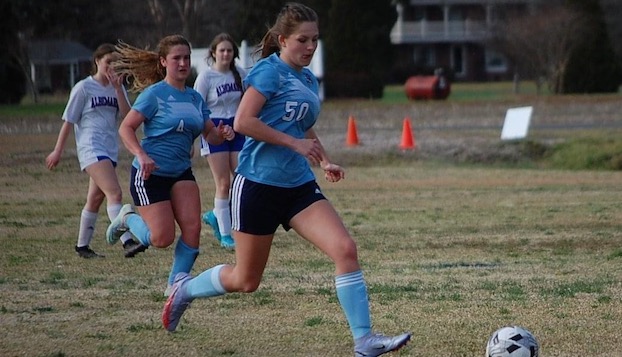 The Raiders (3-4) opened Tar Heel Independent Conference play with 16 runs in the fifth inning against the Eagles.

Senior Devin Cadle hit a grand slam and a bases-loaded triple to set the program record with seven runs batted in, held by Anthony Fletch since. 1982. Cadle was 4-5 for the day and recorded five strikeouts on the mound. Deacon Ethridge went 2-3 and drove in four runs.

The Lady Raiders softball team stayed undefeated at 6-0 with 16-0 and 7-0 victories over the Eagles.

After the Rams scored in the first three minutes, senior Cora Blaine Noble answered with her second goal of the season. Goals from Julia Rouse and Katie Baxter put the Raiders up 3-1 at halftime, but the Rams scored two break-away goals in the final 10 minutes to force overtime.

Neither team was able to score in the first 10 minute period, despite several good looks for the Raiders. Pungo would have its best chance to win in OT when Baxter found herself open from 18 yards out, but missed left giving Ridgecroft possession. The ball found its way in the Raiders defensive third of the pitch and Ridgecroft scored the winning breakaway goal in the 99th minute.,

“It’s a disappointing loss but our girls played their hearts out,” coach Logan Van Staalduinen said. “Our inexperience showed in the second half with some defensive miscues that costed us. We put up over 15 shots on goal and just couldn’t get most of them to find the back of the net. We just went toe to toe with the defending conference champs so we will be fine.”