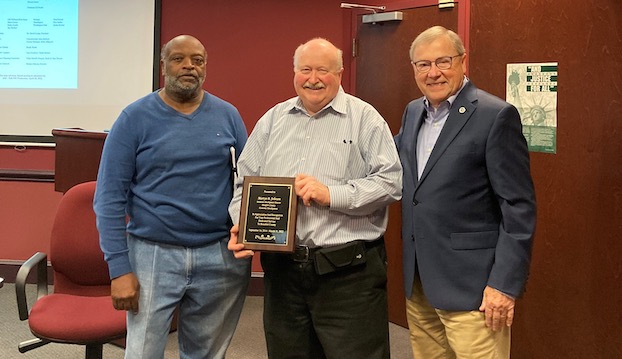 When Martyn Johnson turns off the lights and locks his office Thursday evening, it will mark the end of a 42-year economic development journey that took him around the world before landing in Beaufort County.

Johnson, the county economic development director since 2014, is retiring to spend more time with his family after a career that focused on helping others improve their living standard.

Johnson, 65, came to Beaufort County after a long career with the N.C. Commerce Department, where he helped recruit European businesses to relocate or expand to North Carolina, bring millions of investment dollars and well-paying jobs with them.

Eastern North Carolina’s laid-back, water-based, lifestyle attracted him after his first retirement and the Beaufort County position happened to be open.

“The timing was perfect for both of us,” county commissioner Ed Booth said. “He had great credentials and didn’t require a training process. He had connections everywhere and fit what we were looking for. He’s been a valuable asset and helped our county grow in many ways.”

Johnson list of accomplishments include creating almost 500 jobs and enticing companies to invest over $45 million in the area.

“One of Martyn’s best attributes is his ability to get folks from different organizations to work together on a project,” county manager Brian Alligood said. “Attracting companies and creating jobs is the result of getting people with divergent viewpoints to agree to collaborate so the project gets delivered and Martyn has a knack for that,”

Johnson is moving to Portland, OR. to be near his son and also has family in England and Australia.

“It’s time for me to step back a little and spend more time with them,” he said. “My mom is 85 and I want to be around her more and I don’t see much of my family in Australia, so it will be nice to split my time between them for a while.”

“The idea is to let local high school and community college students know they don’t have to leave the country to get a well-paying job that is interesting,” Johnson said. “We are also trying to reach workers who want to make a career switch, but think retraining might take a longer time than it actually does. With everyone’s help, I think we’ve made a lot of progress.”

County manager Alligood plans on keeping the momentum going with the next person in place soon.

“We are in the interviewing process now and have several strong candidates,” he said. “Martyn has proved that the economic development position is vital to our continued growth and we hope to pick up where he left off. He has earned more time with his family and we wish him the best.”