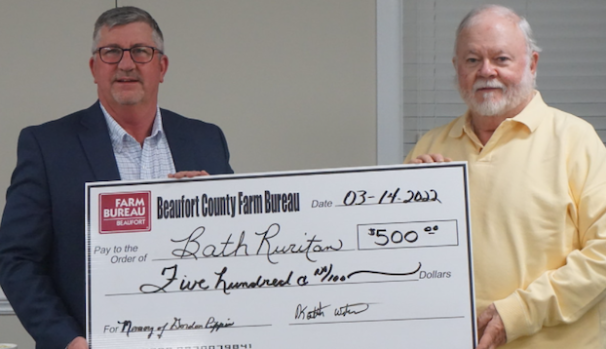 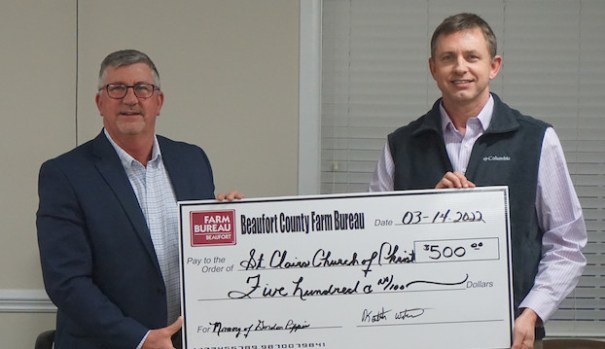 During the Beaufort County Farm Bureau Board of Directors March meeting, members and guests had the privilege of having N.C. Farm Bureaus President, Shawn Harding, join the group. In addition to President Harding, guests Rick Tee, President of Bath Ruritan Club and Craig Hagen, Pastor of St Clair’s Church of Christ joined with a special purpose in mind, to honor and share memories of the late Farm Bureau Agent Gordon K. Pippin.

Gordon joined Farm Bureau on April 1, 1972 as an agent in the Washington office.  Over the years, as the company grew, Gordon grew along with it.  He moved to the Belhaven office when it opened in 1991. The guests present made comments and shared memories depicting   Gordon as a “mover and a shaker; a man that never met a stranger”.  Whatever the activity he was involved in, he aspired to make it a meaningful and successful event. President Harding commented that Gordon played a huge part in him becoming part of the Farm Bureau family, primarily because it was and continues to be an organization where we hire to retire.

Two of his many passions were to be of service to his fellow man and be of service to his Lord and Savior.  Thus, the gifts to the Bath Ruritan Club and to St Clair’s Church of Christ, were presented in memory. Beaufort County Farm Bureau is honored and proud to share in these memories of Gordon K. Pippin.