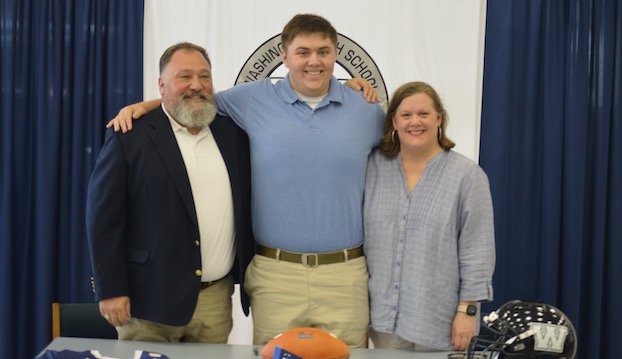 Washington High School senior Wheeler Johnson will play football at The Citadel in the fall. He’s flanked by his parents, Wheeler Sr. and Buffy Johnson

Good thing he did, because head coach Brent Thompson was on the other end, calling to offer him a preferred walk-on spot on the Bulldogs football team.

“It was very exciting and the end of a long process toward that goal,” Johnson said. “It’s a dream come true and I’m very grateful for the opportunity to continue playing football at the school I wanted to attend.”

The 6’3 250 lb. Johnson transferred to the Pam Pack after going to middle school at Pungo Christian Academy in Belhaven and developed into a two-time All-Conference lineman who helped WHS to the Eastern finals his junior year.

The Pack followed up with a 10-3 record last and a trip to the third round last fall.

“He came in here as a freshman and we could see his potential,” coach Perry Owens said. “We got him going in the weight room to transform his body and develop his footwork. He has earned his spot at the next level through his hard work and dedication.”

Division I preferred walk-ons get a roster spot and a jersey without promise of where they fit in the program.

Johnson is fine with that and is ready to show the coaches what he can do.

“I’ll be the third-string kicker if they want me to,” he said with a chuckle. “I’m excited to serve my country and develop in a military environment. I’ve also heard the breeze is nice on Saturday’s in Charleston.”

Johnson received his acceptance packet from The Citadel in the fall, but didn’t know until this week if he would be part of the football program. Two of his great-uncles were in the Class of ’64 and ’68, so he’ll be continuing a family legacy while being grateful to his football family for helping him achieve his goal.

“I would say our win over Kinston for the conference title and a playoff spot last spring would be my highlight, but honestly, every day on the field with my teammates and coaches has been the best part,” Johnson said. “We were all in it together trying to get better and I appreciate Coach Owens, (Alex) Heck and (Ray) Pippin for getting me this far. They’ve worked with me after practice on the little things I need to improve on and it’s paid off.”

An Army ROTC scholarship covers the last three years of attendance costs at The Citadel and Johnson got the Service to Country scholarship to cover most costs his freshman year.

Johnson, an avid history buff, will take ROTC classes in addition to the regular curriculum and graduate as an officer. He’ll have an eight-year commitment following graduation.

“Wheeler checks all the boxes,” Owens said. “He’s a great kid from a terrific family with his academics in order. He’s not afraid to continuing working so he can go down there and play. I’m really proud of how far he’s come.”