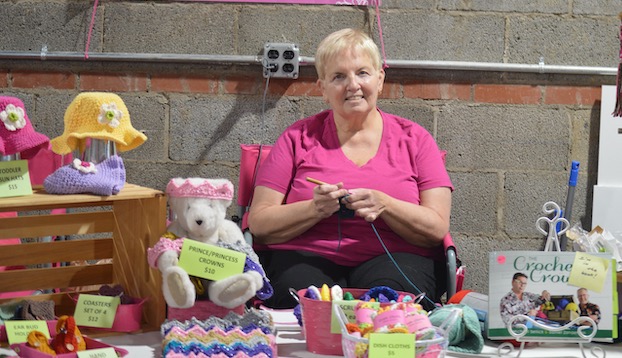 Kathy Nolen of Yarn Chef Creations at the Harbor District Market said her business improved in the fall of 2021 through the Christmas holiday season. She hopes the worst of COVID-19 is over and thinks warmer weather will help all area small businesses. (Steve Barnes/Washington Daily News)

Credit pent-up demand, more spending money, renewed optimism or whatever other factors were in play, but Beaufort County collected over 12 million dollars in sales taxes during the 2021 calendar year.

“We can’t actually call it a record because our data only goes back to 2014,” county manager Brian Alligood said. “However, I’m almost certain that it is, because collections have grown consistently since then.”

Each of North Carolina’s 100 counties gets a check every month from the state Department of Revenue for their share of the tax collected on sales. It takes three months from the time the actual sales happen to the time each county gets the check, so Beaufort County just collected its December payment in March.

“It shows that people are more confident in the economy and that all sectors are doing better,” Alligood said. “2020 was a great year for our boat builders and other larger businesses, but our restaurants, hotels and other small businesses really struggled with COVID-related closures and during the Streetscape project downtown. It’s better for everybody when all sectors are doing well.”

Shep’s Grill on Market Street in downtown Washington has bounced back somewhat from two difficult years according to owner Jason Sheppard, but there’s always a new challenge.

“Business overall is better than it was before COVID, but we haven’t fully made up what we lost just yet,” he said. “Inflation is the biggest thing I’m dealing with right now. 40 pounds of chicken used to cost me $80. Now it’s $252. 35 pounds of fryer oil used to be $17, now it’s $34. It’s tough to pass those costs along, but I have to at least partially.”

Inflation will likely contribute to higher sales tax revenue for the rest of this year, because it’s a percentage of the actually price.

Demand remains strong for boats and other outdoor-related products, most downtown storefronts are full and the Harbor District Market has a waiting list for full time vendors.

“It’s great to see more people out and about and that’s encouraging for our small business owners who have risen above the challenges and learned to adjust,” she said. “Every dollar that stays local goes to support our police and fire departments, the library and helps businesses sponsor local youth league teams. We’re not all the way back yet, but our economy has definitely improved.”