Celebration planned to refresh Covid-weary residents; The Drifters will headline 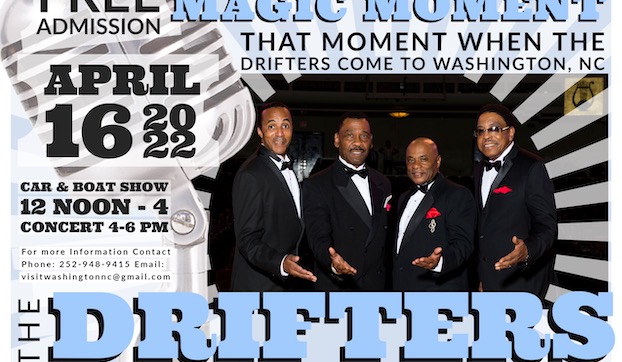 LEGENDS COMING TO TOWN Rhythm and blues superstar group The Drifters will entertain area residents at a free concert Saturday, April 16 at the Washington-Warren Airport. There will also be a car and boat show, demonstrations, a possible military fly-over, and food vendors.(Submitted photo)

Area residents will be treated to a free outdoor feel good concert paired with a car, boat and air show in just over a week, because of a brainstorm session between two town leaders who wanted to lift the post-pandemic mood.

“Al and I were having lunch one day, and just thinking of ways to have a community event that could bring everybody together and lift us away from the effects of the Covic-19 pandemic,” Washington mayor Donald Sadler said, regarding a recent meeting with Inner Banks STEM Center director Alvin Powell, “and what better way is there to bring the community together, all races together, than with music?”  That idea will become a reality on Saturday, April 16th at the Washington-Warren Airport.

As things turned out, Powell knows someone in the entertainment industry who works with The Drifters, a legendary rhythm and blues group that was inducted into the Rock and Roll Hall of Fame in 1988 for toe-tapping, heart-melting tunes including “Under the Boardwalk”, “This Magic Moment”, “There Goes My Baby” and “Save The Last Dance for Me.” Powell learned that the group had an open date, and immediately booked them for the event.

Powell and Sadler, who have known each other for more than a decade, didn’t stop there. Each of them began looking for funding so the concert would be free for participants and the City of Washington would not be heavily impacted by the cost of the event. Powell said vendors’ fees have raised some of that money, and Sadler added that donations from at least a dozen individuals and groups have raised enough money to offset much of the expense of hosting something of this magnitude. Both men estimated that, after final expenses and donation amounts are calculated, the cost to the town is expected to be less than $10,000 for the event.

Making it even more dramatic – just in case some Drifters fans arrive with friends and family members who aren’t as enthusiastic about the performance – Powell has arranged for an air, boat and car show, complete with a simulated helicopter search and rescue demonstration so attendees get to see some of the assets and capabilities of the U.S. Coast Guard, for which Powell is Diversity Officer of USCG Auxiliary Division 20. That group will also have an airplane on display at the event. Powell hinted that a military C-130 fly-over might even become part of the afternoon’s program, thanks to the efforts of the USCG Air Station in Elizabeth City.

Airport gates will open to the public at 12 p.m.  April 16, and the Drifters will perform at 4 p.m. Powell said several displays will be set up on April 15 and open from 10 a.m. to 4 p.m. that day, as well as on Saturday between 9 and 11 a.m. Local boat manufacturers will also display their wares, and the food and beverage booths will be open for business. No outside coolers or beverages are allowed at the event, according to Sadler, because of potential health issues as well as the presence of those vendors, which will include Noonday Rotary’s beer tent.

“Just bring your chair and a quilt or blanket, and please enjoy the day,” he said.