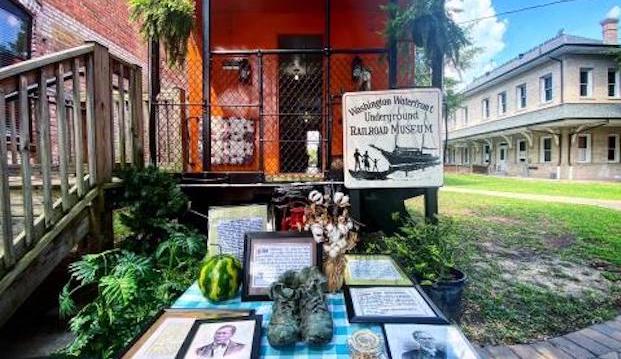 Last week, I was asked during an interview with an Australian journalist about the Washington Waterfront Underground Railroad Museum’s impact on society.  She wanted to know what made the museum remarkable so that the story about it had traveled beyond the United States.  She said she had read articles about it in foreign newspapers.

My answer in part was that I think the world has learned about how people in this community have lived and made important strides in history.  The underground railroad history here goes beyond the freedom-seeking efforts of one group of people.  Almost unknown to some until now, the Underground Railroad united many different groups.  The museum shares the freedom-seeking stories of the enslaved, but it also highlights the history so many other people group’s stories who have lived here from 1774 to 1865.  In those years while slavery abounded, they were also in the same years, the symbiotic relationships of Blacks, Whites, Native Americans, Hispanic, Latino and countless people groups listed on the immigration and census records of Beaufort County.

I think the museum helps to ‘polish the greater Washington/Beaufort County’s mirror’ so that many residents can see their ancestry represented in the Underground Railroad’s mission in positive ways that some people never knew existed.  For this reason, the museum has received state, national, and now it appears, some worldwide attention.  The museum shares local history accurately and with dignity for all the people that were included in its mission.

The museum includes what history books omitted. A local movie company, inspired by the story of the local underground railroad, and the desperate situations some enslaved faced that caused them to want to gain their freedom, filmed the movie’s beginning and end at the museum.  That movie has now been picked up by media mogul, producer, and TV host Byron Allen.  It will be shown nationwide on many streaming sites.

Another local movie producer, film writer and director Ruby L. Thigpin Whitehurst is producing a movie ‘Two Nations’ about the Underground Railroad. Her movie will focus on the symbiotic relationships of freedom seekers, the Native Americans who helped them on the underground railroad, along with other ethnic groups. The movie is being presented as a drama in Louisburg NC and the proceeds with help fund the production of the movie to the big screen.

Building Integrated Communities (BIC) Initiative is partnering with the City of Washington and the Museum for a ground breaking project for Washington.  BIC is a collaboration of the City and the Institute for the Study of the Americas at UNC-Chapel Hill that aims to understand the experiences of immigrant residents and develop recommendations for City leaders to consider that support the integration, wellbeing, education, and leadership development of community members. The museum’s role in this initiative is to provide the history of the Hispanic-Latino population and culture in Washington from 1840-1920.  This history will hopefully provide funding thru the ZSR Reynolds Grant Foundation to provide murals in a city park to honor the ancestry of Hispanic and Latino people who helped Washington have a strong, vital economy and history.

The museum is not just a historical bookmark, it is a mirror that shows this is us. A community with a long and storied past who, despite diversity at times, has become stronger and better.   This is who we are and people are seeing this illustrated in a museum in a tiny orange caboose on the Washington waterfront.