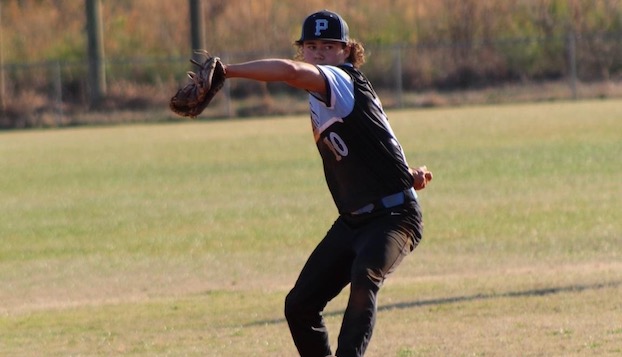 Pungo Christian Academy’s first girls soccer team is making a strong case to stick around for a while.

The Lady Raiders won their third straight match, 6-0, over Halifax Academy. Katie Baxter opened the scoring with a chip shot goal five minutes in, then Ashley Pippin put the Raiders up 2 – 0 with a shot from just outside the goalie box after a nifty pass from Baxter.

PCA (4-4) extended the lead to 4-0 at half on another Baxter goal and 8th grader Mia Paniagua’s first career goal off a penalty kick. Julia Rouse scored 10 minutes into the second half and Sayla Brown scored her first career goal to cap the scoring.

Previously, the Raiders won two road contests, 4-1 at Lawrence Academy and 2-0 at Ridgecroft.

Baxter tallied her second hat-trick this season against Lawrence and Rouse added the final goal as the Raiders claimed second place in the Tar Heel Independent Conference.

Friday’s victory came after starting goalkeeper Audrey Gibbs injured her wrist in warmups, which left the Raiders without an experienced keeper.

Sophomore midfielder Reagan Walker stepped up, along with the Raider defense, for a shutout in the 2-0 victory.

“This was a big week for our team.” coach Logan Van Staalduinen said. “Our defense stepped up to the challenge after giving up some goals late last week that cost us. When you lose your goalie 10 minutes before the game you have a lot running through your mind. I’m so proud of these girls for stepping up and facing the challenge instead of backing down.”

The Raiders lost, 10-0, to Parrott Academy in Kinston Friday. Conner Sweet, Davin Cadle, Evan Woolard and Deacon Ethridge each had one hit.

PCA bounced back with an 8-6 win over top-ranked Lawrence Academy in Merry Hill Tuesday.

PCA led 5-0 in the fourth inning, then survived a comeback for win. The Raiders struck first with two runs in the third.  Dylan Simmons smacked his second double of the day scoring Tristan Mann to give the Raiders an 8- 6 lead in the fifth.

Cadle shut down the Warrior bats in the final two innings and PCA took sole possession of first place with a 3-0 league mark.

Senior Dylan Simmons led the Raiders at the plate, going 3-4 with four RBI and two doubles.

Deacon Etheridge earned the pitching win, giving up no runs on four hits in 3.1 innings. The teams will square off again on Thursday at PCA.

On Tuesday, PCA finished second in a conference meet at Valley Pine Country Club in Lasker. Sam Warren led the Raiders with a 40, Gavin Sawyer shot a 46 and Davis Lee shot a 48. The Raiders will host Ridgecroft School and Community Christian in a nonconference meet on Thursday at the Washington Yacht and Country Club.