Literacy gave him a second chance 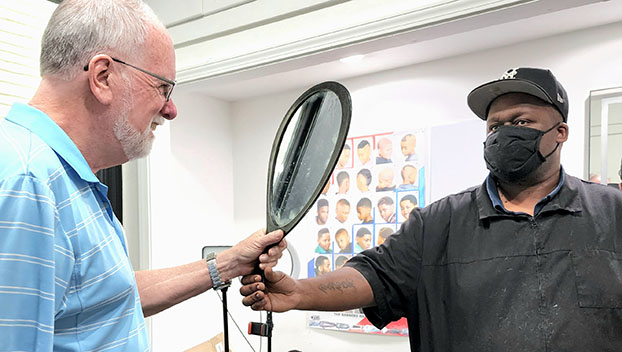 Will Mitchell holds a barber shop mirror so John O’Neil can check out the results of Mitchell’s precision work as the newest employee at the Premier Barber Shop on North Market Street. The pair met when Mitchell enrolled with Literacy Volunteers and O’Neill became his tutor. The friendship grew and, long after Mitchell graduated, the pair still spends time together as friends. (Karen Thiel)

Will Mitchell almost never talks about the part of his life that led him to a lifestyle that included the presence of law enforcement officials. What he will do, instead, is point people to the results of his decision to focus on a future that now has potential for him and the people he loves.

“I wasn’t a bad person, just made bad decisions. I don’t want to be back there any more,” he said of his early adulthood, which included “hustling to take care of me and my family, but that turned into just going for the money. God knew I wasn’t going to stop doing what I was doing unless He stopped me, so he allowed me to be stripped of everything,” Mitchell said of the arrest that resulted from his lifestyle.

The jail time that followed gave Mitchell a new outlook on life, which led him to Literacy Volunteers of Beaufort County, where he enrolled in the program that helped him get his high school equivalency diploma. That’s where Mitchell met volunteer John O’Neill. “It was a long hard process,” O’Neill said of the time and effort of earning his diploma. “Sometimes even I would get a bit discouraged (for him) but Will would buck me up. I’m not sure how it happened, but I became a “Will believer”, just as invested as Will was – and still is – in achieving his goals.”

The pair persisted through the Covid-19 pandemic and beyond. “I’ll never forget sitting in the Beaufort County Community College auditorium and watching Will walk across the stage to receive his degree…and him telling me what a big deal that was,” O’Neill said, adding that Mitchell’s success has inspired his younger family members to work just as hard to achieve their dreams.

That work didn’t end with Mitchell’s high school education. His dreams included a career as a barber, a tradition in his family. “I don’t know how he found the energy day after day to go to school, then go to work at the chicken plant, and repeat this over and over,” O’Neill said, “but Will kept moving forward and last December he was done. Will could now start cutting hair.”

Mitchell said he is living his dream, and his boss is just as happy about that success. “It’s been a great experience just being able to mentor him and give him an opportunity that he’s really looking for,” said Solomon Ore, owner of Premier Barber Shop on North Market Street. “Will has a good character and is down to earth with our clients,” Ore said of Mitchell, whose status as an apprentice is part of the process for full accreditation as a barber. “He knows how to hone into his craft and pay attention. So far everyone has been back who has had a chance to get a service from him. They love Will and it’s been working out for him.”

Even more than the praise, Mitchell said he wants his life to become the motivation that leads others to aim for higher goals. “Sometimes people don’t know another way until somebody shows them. I still go through stuff in my life, but I am striving to be the best I can be. I want to help other people who don’t have opportunities now, and give people the chance to go to the next level with their passions and dreams.”