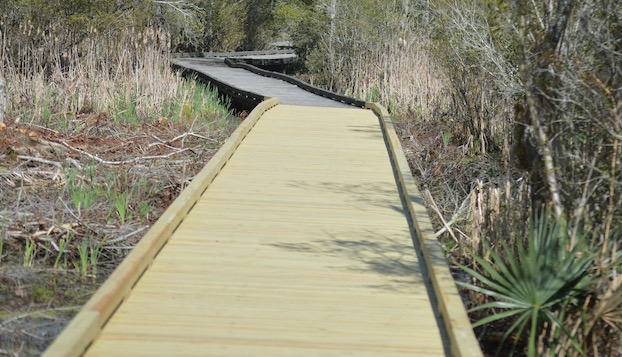 The Palmetto Boardwalk at Goose Creek State Park reopened last month. It had been closed since Hurricane Florence damaged it the fall of 2018. (Steve Barnes/Washington Daily News)

Hurricane Florence did major damage as it swept across Eastern North Carolina in the fall of 2018.

Goose Creek State Park absorbed its share of the damage, including a section of the Palmetto boardwalk that was left in a twisted pile of potential kindling after the storm blew through.

The freshly repaired 1,000 to 1,500 foot section reopened in early March after a three and a half year wait, marked by multiple divisions of federal and state agencies involvement that led to several layers of red tape, delays in the bidding process, COVID-19 issues and worker shortages as the project was ready to begin.

“We had over a year of delays in starting the project after it was bid out,” Goose Creek Park superintendent Doug Lequire said. “it felt like forever to get things started, but it only took about six weeks to finish once work began. We’re excited and relieved to finally have it open again.”

The rain from Florence lifted the pilings that support the boardwalk out of the ground and damaged the middle section of the boardwalk, which connected the Visitor’s Center to the Ivy Gut and Tar Kiln Trails with a half mile walk through the swampy ghost forest area.

“We heard quite frequently from frustrated walkers and bikers who got halfway across the boardwalk and had to turn around,” Lequire said. “We’re happy that’s no longer the case.”

The Palmetto was one of five boardwalks that were recently repaired, including two along the Ivy Gut trail, one on the Goose Creek Trail and one on the Flatty Creek trail, which Florence completely washed away, denying access since 2018.

“Some people don’t even know about that trail since it’s been closed so long,” Lequire said. “There’s lots of scenic views along that part and it’s fun to explore.

Lequire said park visits increased during 2021 and have continued to grow in the first quarter of this year. He cited the recent falconry presentation as an example of increased programming at the park and said more is on the way.

“Our foundation, Friends of Goose Creek, did a great job putting on that show and we’re trying to schedule similar events throughout the summer. People are excited to get back outside since the weather is warmer and COVD has calmed down, so we want them to use the park.”