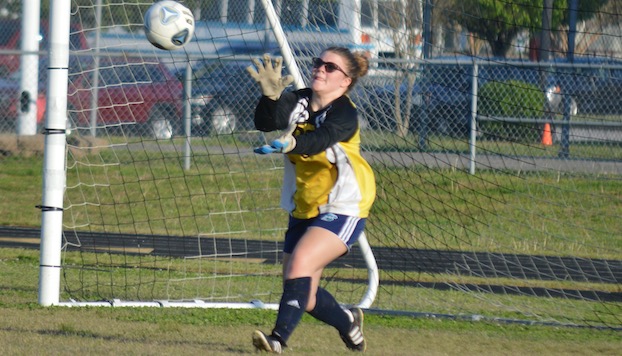 The Southside girls soccer team is about as even as it gets, record-wise, as they prepare for the final seven regular season games.

At 4-6-5, the Seahawks are much improved over last spring’s COVID-19 shortened and delayed 2-8-3 campaign despite having only one senior on the 24 player roster.

“At first glance, five ties don’t look all that impressive, but those are games we’ve really struggled to win in the past,” coach Jay Petty said. “We’ve already scored more goals (29) than we did last season despite being very young.”

The Seahawks have five juniors in addition to senior Maya West, but three have missed multiple matches with injuries.

Southside reeled off three straight victories in late March and have beaten Bear Grass twice, Cape Hatteras and 2A Greene Central. The ties and losses have all come against 2A opponents.

The three leading scorers are all sophomores and the Seahawks start three freshmen on the back line defensively.

Lilly Davis leads the team with nine goals, Emma Silva has eight and Selena Mondragon has six with five assists.

Petty said all three are much improved along with freshmen defenders Kimberly Perez and Valerie Diaz. Senior Maya West serves as a jack-of-all trades by playing many positions.

“A couple of weeks ago I told those two to stop playing like freshmen and they responded,” Petty said. “They have been outstanding in front of the goal and have improved rapidly. I’ve bounced Maya all over the field to take advantage of her versatility and she’s done a great job leading this young group.”

Only three Coastal Plains conference schools have girls soccer and East Carteret is a 2A program. That leaves Lejeune and the Seahawks to battle for a 1A state playoff spot. The Devil Pups are 1-2-2 and host the Seahawks April 27 before traveling to Chocowinity May 4th.

“We’re in good shape for the playoffs if we beat them twice,” Petty said. “We’re getting better every day in practice, so hopefully, it will pay off.”