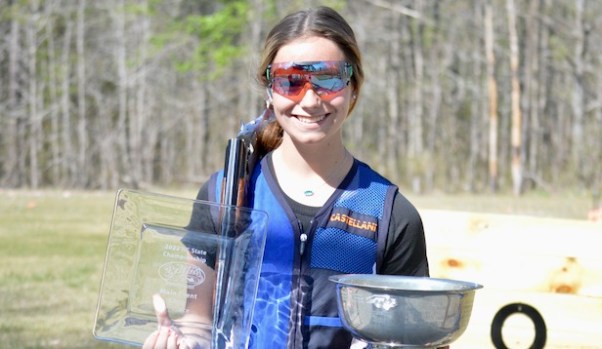 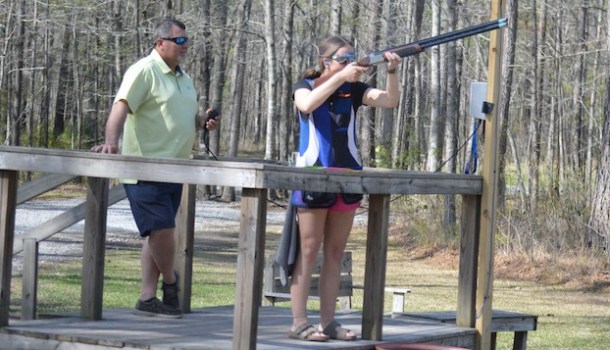 Oakley, as part of the Buffalo Bill Wild West show in the late 1800’s, became famous for shooting a cigar from her husband’s lips and piercing a playing card from 30 paces.

Washington’s Katelyn Alligood is not there just yet, but she’s well on her way.

30 women of various ages from around the state competed in the two-day event that consisted of shooting at 100 4.25 inch round clay targets, in the air and on the ground, while rotating between 15 different stations each day. The targets varied in trajectory with some at eye level, some higher and some moving along the ground, all from 10 to 60 yards away.

Alligood smashed 148 of her 200 total moving targets after losing by a single target last year.

“I was still happy after last year, because I won money for second place, but it’s more fun to win,” Alligood, who collected $1,200 last weekend, said. “I like to be out in the woods shooting and this sport is a friendly competition, so it’s good either way.”

Alligood played volleyball for two years at Bath Elementary, but other more traditional sports didn’t hold her interest. Her dad, Keith, starting taking her hunting and fishing when she was five and she fired her first shotgun when she was 10.

“She’s always liked hanging out in the wood with me,” Keith Alligood said. “I’ve taught her how to handle a gun safely and she’s developed into a natural shooter. Entering contests was a natural next step.”

Katelyn uses a Browning 725 over/under shotgun in competitions and still remembers her first time shooting on the family’s 20 acre farm on Betsy’s Elbow Road near Washington.

“I starting crying because I couldn’t hit anything,” she said. “My dad forced me to stay and keep going and I thought it was pretty cool when I exploded my first target.”

She entered her first competition at 12, in 2017, and notched her first of 11 career victories later than year.

Winning the 2020 Junior U.S. Open in Georgetown, S.C. boosted her confidence and proved to herself that she could compete with shooters of any age.

“We are just fine-tuning her natural talent,” said Hunters Pointe Sporting Clays owner Mike Oliver. “Her dad, Larry Corbett and my son Braxton, have all worked with her over the years, but she has the hand/eye coordination to be really good. We teach all the young shooters the correct foot position, how to mount the gun, how to sight the target and some other mechanical things, but she has the ability to put it all together.”

Katelyn will graduate from the Beaufort County Early College High School in December and attend Wayne Community College to become a dental hygienist.

She works at Athletic Edge in Washington and finds the time to ride her two horses, Cheyenne and Daisy, while firing her best practice shots a couple of times a week.

In addition to her state championship prize money, she will add her name to the Annie Oakley Cup and keep the traveling trophy for at least a year.

“I can see myself doing this for a long time,” she said. “It’s fun, the camaraderie at the tournaments is great and I’ve made some good friends.”