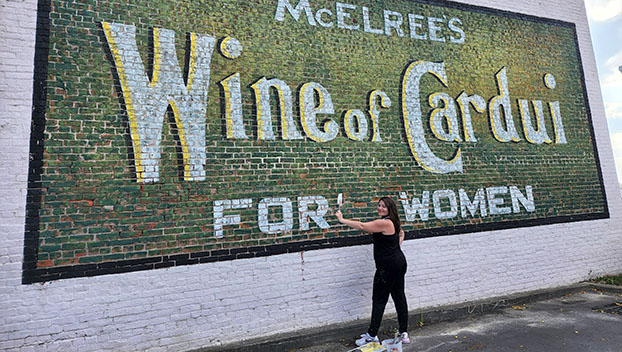 This ad for a “womens’ tonic” at the river end of South Market Street is the first of almost a dozen “ghost signs” that artist Samantha Brinson, pictured here, is restoring with help from the Historic Port of Washington Project and several local fundraising efforts. (Karen Thiel)

A newly returned North Carolinian has teamed up with the Historic Port of Washington Project to produce an artistic revival of Beaufort County’s earlier history – and bring new life to her home town. Samantha Brinson is restoring the “ghost signs” that can be found all over Washington, revealing advertising that, in earlier days, was clearly visible on the exterior walls of local buildings and, in cities all over the world, are considered emotional as well as physical treasures.

It’s a long way from the glitzy New York scene, where Brinson moved after graduating from UNC’s School of the Arts in 2011. She immediately scored jobs that included creating stage sets for Broadway, Disneyland and Radio City Music Hall productions, as well as Sesame Street and Dreamworks, plua performers as diverse as Madonna and Blue Man Group. During an interview this week, Brinson said her life – and her outlook on what’s important – changed as a result of her experiences when the Covid-19 pandemic limited so much of what she considered important to her. As a result, she moved back to her family, which still lives in Beaufort County.

Brinson’s choice of art projects also changed. Since her return, the residents of Beaufort County have been treated to fanciful pieces including “that butterfly” on the brick wall outside of Rachel K’s Bakery, a three-piece almost-abstract interpretation of the waterfront currently mounted in the Harris Lane alleyway, and a spunky “crab” at Pamlico Animal Hospital, which has a face that could be either a dog or a cat, depending on the preference of the pet owner. She has also turned her heart toward children, helping them redecorate the outer wall of the Aurora Fossil Museum before last year’s town Christmas parade. “I want to turn kids’ hearts and souls on for art,” Brinson said, adding that plein air painting events at the riverfront are also on her wish-list but, for now, she is all about those ghost signs.

Brinson first presented her idea to HPOW members in 2021. The group’s records indicate that members signed on immediately, voting their “enthusiastic and immediate approval for further research.” Brinson and HPOW members are currently working with several town departments, building owners and local groups to get site approvals and raise the funds needed for each sign.

Brinson’s first completed project is the “Wine of Cardui” sign, located at the river end of South Market Street. The product’s nickname – “baby maker” – brought giggles at the North Carolina Estuarium last month, during an HPOW presentation about the effort. Eleven other ghost signs are on the project list, including a “Brides Choice” restoration at the Mulberry House Brewery, the Coca Cola ad on the Copper Canyon building, and less distinct signs at the Senior Center, the Sheriff Building on North Market Street, the Grace Building on West Main Street, and the former Manifest Antiques location on East Main Street.

Brinson said her plan to restore ghost signs that, in other states, are considered historical artifacts not to be touched, is a valid treatment of the treasures for “ghost sign hunters” nationwide who are looking to uncover some of their “secret lost histories” and retain a sense of continuity and connection to the places they have lived. Brinson said her careful restorations will beautify the downtown area and extend the time during which they can remind residents and visitors that Washington was “a center of commerce at the turning point of the century, not just a quiet little port town. I’m bringing them back to life.” 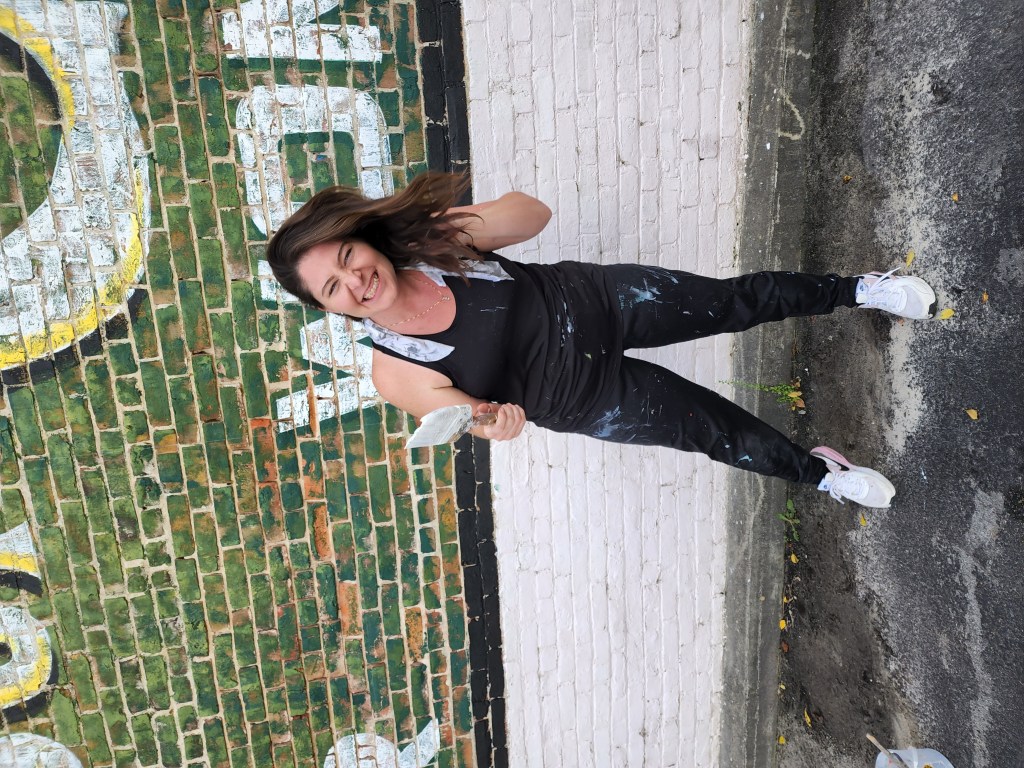