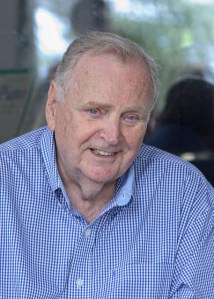 Mike was born in Lenoir County on June 25, 1939 to parents Clint Rouse and Hazel Phillips Rouse. He had a brother W.C. “Sonny” and two sisters, Lynn and Judy.

He and his wife, Gloria Thomas Rouse, who survives, lived at Carolina Beach for the last few years.

Mike began his newspaper career in 1959 as a reporter for the Goldsboro News-Argus. In 1994 he returned there as editor to finish out his journalism career.

Mike had moved from Goldsboro to the Charlotte bureau of The Associated Press in 1961, and he was there for 10 years, minus two years on active duty in the U.S. Army. Meanwhile he had been promoted to news editor for the Carolinas.

In 1971 he was offered a transfer to the Chicago AP bureau but he chose to remain in his home state and became managing editor of the Durham Morning Herald, position he held for 13 years. He moved to Washington, N.C., in 1989 to become general manager and executive editor of the Washington Daily News.

Mike retired in 2005 after eleven years as editor of the Goldsboro News-Argus.

During his first years as the Carolinas news editor for the AP, Mike supervised the collection of votes in South Carolina’s fall election with a reporter in each of the 640 precincts. It was the first time such for such an undertaking.

Mike and his bureau chief, Carl Bell, hired the S.C. Education Association to have teachers in every precinct to call in the votes from precincts as soon as they were counted. He set up telephone banks in the basement of a municipal auditorium in Columbia, and he borrowed a computer from a community college, Richland Technical Institute.

The project was done on behalf of the then-newly formed News Election Service, a consortium of wire news services and broadcast networks.

Also among his responsibilities in those years was the direction of the AP’s coverage of the civil rights movement in North Carolina and South Carolina during its crucial period.

During his tenure at the Durham Morning Herald the newspaper won coveted three public service awards from the North Carolina Press Association.

He was cited by the state press association several for excellence in editorial writing.

Mike was active in professional organizations and was particularly interested in laws that made governmental meetings and public records more accessible by the public. For several years he was chairman of the press association’s Legislative Committee.

Mike was a deacon and Sunday school teacher for years at Madison Avenue Baptist Church in Goldsboro.

Mike had served on the boards of the United Way of Wayne County, Crime Stoppers and the Washington Chamber of Commerce. He was a long-time Kiwanian.

Mike enjoyed the outdoors and was a hunter and fisherman, often with either friend Gene Price or brother-in-law Tom Baines. He was an avid reader, and especially enjoyed history.

In retirement Mike continued his writing, with a book titled “High Calling: The Story of a Mountain Preacher,” a biography of Rev. Ronald Holland, father of his then-wife, Billie.

In addition to his wife, Gloria, he is survived by his son, David C. Rouse of Goldsboro and his wife, Jennifer, and his step-son Kevin Anderson; by his daughter, Jane Rouse Ellison of Wilmington and her husband, Lucien; three grandsons, Jack, Archie and Baines Ellison, and two sisters, Lynn Merritt of Warsaw and husband “Pepsi” and Judith Brown of Jacksonville and husband Guthrie.

Mike’s brother, W.C. “Sonny” Rouse, died in 2016. Also preceding him in death were his first wife, Faye Baines Rouse, and his second, Billie Holland May Rouse.

A memorial service will be held 11am on April 15, 2022 at Madison Avenue Baptist Church in Goldsboro NC. There will be no burial because the body is being donated for medical research.