Police station update: concrete will be reused on site 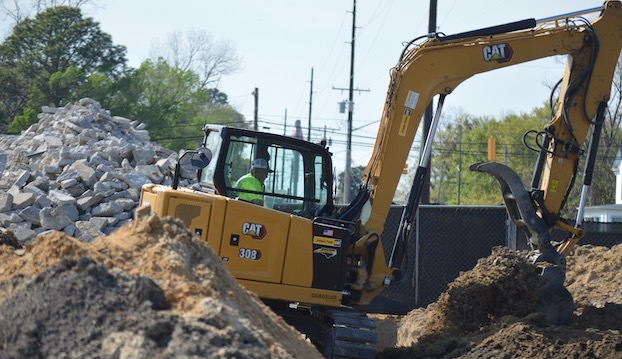 The pile of concrete stands almost 25 feet tall in places close to the intersection of 3rd and Bridge St. in downtown Washington. Some of the construction workers might even get an occasional whiff of Dr. Pepper as they prepare the site for the town’s new police station.

The bottling plant is long gone, but some concrete had been in the ground for more than 80 years until last month when Hudson Brothers Construction Company crews started digging it up and piling it along the perimeter.

It’s the most noticeable part of a project that started seven weeks ago and city officials have a simple plan to remove it within the next two or three weeks.

“We are going to grind it into pea gravel and use it for the base of the parking lot surrounding the new station,” city manager Jonathan Russell said. “We were talking with the site engineer and decided that would be the best reuse. It’s an environmentally sound solution and it will save us a few thousand dollars. It’s similar to what happened with the old concrete from the lumber yard at the end of Water Street where the new Moss Landing II development is going in.”

“That will be the next visible stage of progress,” Russell said. “The project is on track and on budget and we hope to open the building in March of next year.”

The former downtown station flooded in 2018 during Hurricane Florence and the police department has operated out of a temporary facility on Highway 264 East since then. The city is borrowing $7.25 million to fund the new building with the other $725,000 coming from city coffers.

“We are getting an exceptional interest rate of 1.8 percent and we are not going to raise taxes to fund this project,” Russell said. “The remainder will come from capital cash on hand and we think the new station will provide an esthetic improvement to that area of town.”

The new station will use 17,000 square feet of the three acre rectangular parcel boundaries between 3rd St. to the north, 2nd street to the south, Van Norden St. to the east and Bridge St. to the west.

Russell said the project will encompass two acres with around an acre along the 3rd street boundary left for future development.