From a Knight to a Mustang; James signs with MACU 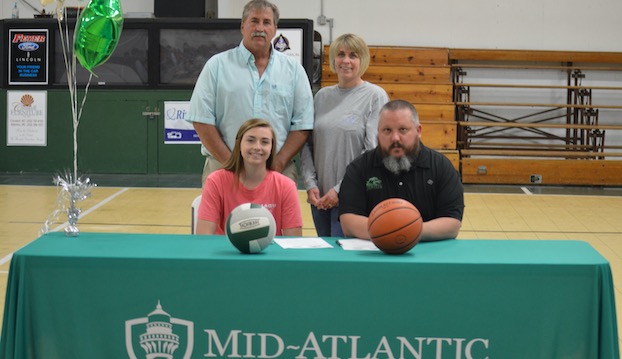 Most of the 154 Terra Ceia Christian School students filed into the gym and took a seat on the bleachers at the end of Tuesday’s school day.

Shortly after athletic director Caroline Gardner explained what was about to happen, a chant of “Car-lee, Car-lee, Car-lee” arose from the kindergarten section, ricocheted off the rafters, bounced off the bleachers and engulfed a smiling senior seated behind a table on the basketball court. Coach Carly was moving on and her students were happy for her.

James signed a National Letter of Intent to play volleyball and basketball for Mid-Atlantic Christian University in Elizabeth City during a ceremony at TCCS Tuesday afternoon.

James plans to major in Elementary Education with the goal of becoming a kindergarten teacher. She’s been a teacher’s assistant at that level at TCCS and enjoyed her students’ spontaneous outburst.

“It surprised me and I thought it was really cool,” she said. “Those kids make me smile and bring joy to my heart every day. I think my going on to play in college shows them that kids from small schools can accomplish things if they push themselves to get there.”

James played volleyball her junior and senior year, is a four-year softball catcher and scored 1,266 points during her varsity basketball career.

“I saw her play a couple of months ago and really liked her shooting ability,” Mustangs coach Charles Troxell said. “She’s versatile and can make us better. I wanted to be here to share the moment with her and it was pretty cool when the little kids started shouting her name.”

James didn’t play volleyball until her junior year, but learned quickly. She helped the Knights to their first NCISAA state playoff appearance since 2006 that season, then returned to post-season last fall.

“She improved so much between her junior and senior year, coach Jamie Van Essendelft. “She was always humble, very coachable and took the initiative to suggest practice drills to help us improve. I rotated her through all the positions by the end of our season, so they (Mid-Atlantic) are getting a player who knows what she’s doing out there.”

James, whose family lives in Creswell, has been a Knight since kindergarten and knows life will change after graduation.

“I think Mid-Atlantic will be a great place for me, just like TCCS was,” she said. “It’s bigger, of course, but not big for a college and it’s a Christian environment where I can continue to grow in my faith. The campus is beautiful with the river behind it and I get to play two sports. I’m grateful to everyone here and to my parents for helping me get there.”