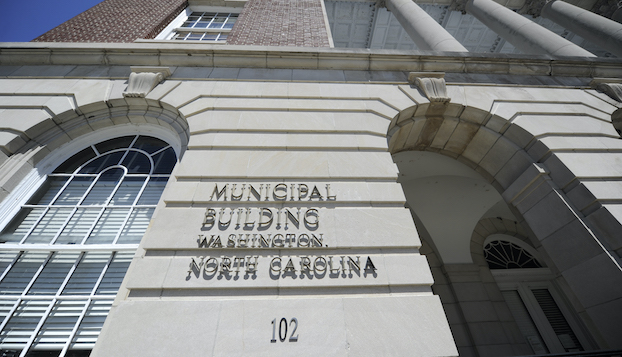 Resident safety, competitive salaries, continued “conservative expenditures and sound fiscal management” are among the justifications listed by City Manager Jonathan Russell as he introduced a proposed city budget this week. The plan totals approximately $117.5 million and would include an increase of just under six cents for every $100 of residents’ taxable property. Although there were several Washington residents at the budget workshop held last week, none of them chose to speak when invited by Russell.

However, one city council member wasted no time expressing his disapproval in a public manner, confirming that not everyone on the council is happy with the reasons or ideas Russell presented at that meeting.

“Council members have already informed me that they are not going to go for a six cent increase on taxable property,” Russell said two days after Tuesday evening’s budget workshop, which was attended by several department heads, and representatives aligned with current city projects.

“The city council doesn’t want to burden our residents and businesses with that much extra expense after this season with COVID and all the issues it brought,” Russel said of the immediate request for a reduction of the proposed tax, adding that council members he’s spoken with are urging him to decrease the proposed tax rate to no higher than five cents per $100 of taxable material.

Russell said the “active construction” phase currently underway is estimated to be finished by the spring of 2023. The request includes $10.4 million for the 2022-23 budget year.

Russel reminded members of the City Council that they “made it a priority to improve pedestrian safety throughout the community through improved crosswalks and sidewalks along all of city- and state-maintained roadways.

Russel said population growth and increases in heath crises are creating burn-out within the city’s EMT staff and driving the need for at least four more so that the load is lighter and emergency medical staff will not be risking the lives of patients or themselves by covering shifts while they are exhausted. An estimated cost of $308,00 has been proposed.

Russell noted that financial resources from the city’s “enterprise funds” would also supply part of the money requested for the upcoming budget year. Seven enterprise funds are part of the Washington City funding structure, involving the seven city departments, which are considered “business” and operated as such. They earning “profits” from their departments’ rates, which town leaders use for related projects. Their combined budgets total an approximated $8,300,000.

Russell’s opinion of the budget proposal was publicly opposed this week, in an online post by City Council member Bobby Roberson, who said the proposal is “loaded with plenty of records for our local citizens”-but not the kinds they want or need. Among almost 10 criticisms, Roberson noted that the proposed price of just over $100 million is the first of that amount since the town was incorporated, and represents a 20.75% increase from last year’s total. In a brief comment this afternoon, he promised similar posts in the near future.

Russel said the timeline for this budget process includes a second public hearing in May, for which a date has not yet been set, and final approval in June. The first public hearing was held after this week’s meeting, attended by several people who all chose not to comment. Related meetings will be listed, in advance, in The Washington Daily News.