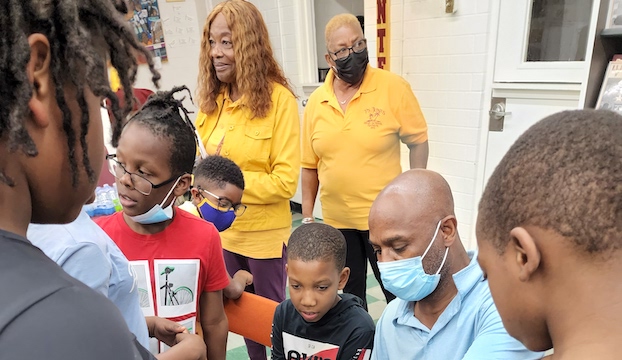 ADMIRATION STATION: Members of the Boys and Girls Club gathered around Romello Boston, who brought his sketches to New Bern-based guest artist Lee Hood during a recent celebration of contest winners who, in partnership with the PS Jones Museum of African American Education, sponsored the recent themed activity to combine art and history. Boston won second place standing for his drawing of Rosa Parks.

Two local agencies have combined art and history to inspire the people they serve, coming up with some happy results, all on display during Spring Break and until the end of April. Washington’s chapter of the Boys and Girls Clubs of the Coastal Plain teamed up with the PS Jones High School Museum of African American Education, challenging the group’s youthful artists to draw the portrait of an African-American person whose accomplishments were inspiring.

“I encouraged them to find people who aren’t well known, do their research, and choose someone who inspires them in a personal way,” said Alice Sadler, curator of the museum. “Everybody knows about Martin Luther King and there are always sports figures getting attention, but I was trying to help them break out of that a little bit.”

Sadler’s idea worked. Choices included Katherine Johnson, the mathematician who became the first woman of color to work at NASA, earning the name “the human computer” for her work on the Apollo Moon Landing, Vivien Thomas, the son of a slave who was paid as a janitor during the mid-1930s but rose through his challenges and eventually designed the surgical solution to fetal baby syndrome; and Shirley Jackson, the first African-American woman to earn a doctorate degree at Massachusetts Institute of Technology, who is now president of Rensselaer Polytechnic Institute.

The top 10 artists’ work are currently on display at the museum, which is located at 847 North Pierce Street and open11am to 3pm on Thursdays, Fridays, and Saturdays — including Spring Break week. “We are really hoping will folks bring their children to the museum. There is so much inspiration here, both from our history and from these children who will shape the future.”